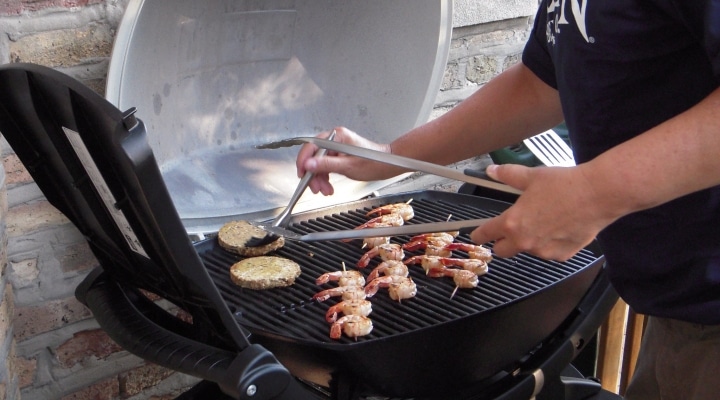 Grilling food is popular, but it isn’t without risk. According to the National Fire Protection Association, an average of 10,600 home fires are the result of grilling incidents—sending 19,700 people to the emergency room annually. Thermal burns account for 9,500 of those injuries. (photo by Mirandala, creative commons/flickr.com)

FAIRFAX, Va. — As the weather warms up, and people gather for backyard cookouts, it’s time to brush up on safe grilling habits.

Grilling food is popular, but it isn’t without risk. According to the National Fire Protection Association, an average of 10,600 home fires are the result of grilling incidents—sending 19,700 people to the emergency room annually. Thermal burns account for 9,500 of those injuries.

Chris Myer, a lieutenant for the City of Fairfax Fire Department and a member of the Virginia Farm Bureau Farm Safety Advisory Committee, said many fires are the direct result of grill placement. A common problem is locating the grill too close to combustible construction, such as vinyl siding and wood decks.

“What ultimately happens is if they leave their grill on or the fire gets slightly out of control, the siding starts to melt and will ignite the wood,” he said. “It gets hot and moves quickly.”

Myer explained that vinyl siding is petroleum-based and flammable. Fires can easily spread to attics, which often have blown-in insulation, another combustible product.

“It doesn’t take anything for an outside grill fire to burn the siding and get into the roof before the occupants have any clue that their house is on fire,” Myer cautioned.

He said another common issue, particularly in rural areas, is the use of inappropriate ignition sources to start a grill.

“Instead of using lighter fluid, an electric starter or a charcoal chimney starter, people will get gasoline or diesel since it’s readily available on the farm,” Meyer said.

According to the NFPA, gas grills contribute to more fires than their charcoal counterparts, with most problems caused by gas leaks or breaks. If a gas smell is detected, have it checked out, Meyer advised.

And when finished grilling, let things cool down, he stressed.

“People will put their charcoal briquettes that are still hot into a plastic container, a paper bag, or a plastic trash can,” Meyer said. “That’s how a significant amount of fires start on the charcoal grill side.”

To stay safe this grilling season, follow these safety tips from the NFPA: