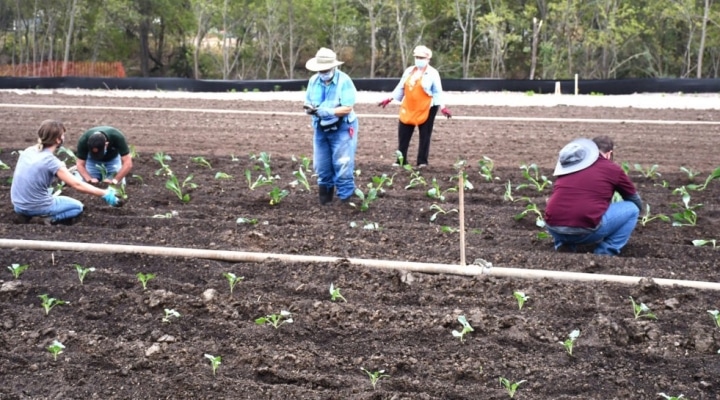 The planting and groundbreaking event was attended by more than 60 people. Hosted by Bexar County, which is funding the urban farm project, the event celebrated the urban farm’s initial crop planting.

The farm is a collaboration of Bexar County, the Bexar County Commissioners Court and AgriLife Extension in Bexar County. The project, which has an estimated construction cost of $2.1 million, is being developed on 10 acres of property previously owned by the Union Pacific Railroad and acquired by Bexar County in 2016.

When complete, Greenies Urban Farm will include demonstration and teaching gardens, an outdoor classroom and kitchen, a 300-person event center, a farmers’ market and more.

The first round of crops, planted at the urban farm by Bexar County Master Gardener and AgriLife Extension volunteers, were cool-season vegetables, including a Texas Superstar variety of broccoli, as well as cabbage, kale and spinach. Teams of 10 were used to maintain social distancing requirements.

“The crops we are producing now as well as the next crops we will plant, which will include cool-season spinach, Swiss chard and collard greens, will be donated to the San Antonio Food Bank once they are harvested,” said David Rodriguez, AgriLife Extension horticulturist for Bexar County. “We have timed the planting so the produce will be ready for harvest from Thanksgiving to New Year’s.”

Rodriguez and Larry Stein, Ph.D., assistant horticulture department head and AgriLife Extension horticulturist based at the Texas A&M AgriLife Research and Extension Center in Uvalde, were instrumental in laying out the 1-acre planting site, plant selection and volunteer coordination.

Bexar County is responsible for the development and maintenance of the urban farm’s building structures, which will include the new AgriLife Extension county office.

“The first phase of the project, which was to prepare an acre of land for vegetable planting, has been completed, and the next phase will be to build the vertical structures,” said Jesse Escamilla,  project manager with Bexar County Facilities Management Department. “By next July we hope to have completed the AgriLife Extension office, outdoor classroom and raised ornamental flower beds.”

Bexar County Judge Nelson Wolfe said this is an ideal time for the development of such a project.

“It is especially important right now, during the COVID-19 pandemic, that the county’s residents need access to fresh and nutritious foods,” Wolfe said. “We need to be sure everyone not only has the opportunity to eat well, but that they also have access to educational programs to maintain those healthy habits.”

“The new Greenies Urban Farm will assist the San Antonio Food Bank in helping families experiencing food shortages in San Antonio,” said Calvert, who represents the county precinct where the urban garden is located. “On behalf of the folks who need our help, not just in my precinct but in all the areas the food bank serves, I am proud to lead the fight to ensure no one goes hungry during these difficult times.”

Cooper said he was honored the San Antonio Food Bank was chosen as the designated recipient of the first harvest from Greenies Urban Garden.

“The urban gardens and its educational offerings will be a great help to Bexar County residents who are food insecure or live in ‘food desert’ areas and need fresh produce and/or want to learn how to grow their own produce and better maintain their health,” Cooper said.

Calvert noted the urban farm will help revitalize that area, which is home to Wheatley Middle School, churches and residential areas.

“This area where the urban farm is being built used to be called the Goonies because it was overgrown with trees and brush and completely undeveloped,” Calvert said. “Now we’re hoping that in the future this area will be known as the Greenies instead — and will one day be a public destination site.”

Bringing agriculture to the big city

“As I was traveling here from Uvalde and passing through towns like D’Hanis, Hondo and Castroville and seeing all the agricultural activity in this area, I thought how great it was that this project is bringing agriculture and the lessons of agriculture — hard work, resilience and persistence — to this location,” said Michael Haynes, AgriLife Extension district administrator for the agency’s 21-county Southwest District 10. Haynes was among the speakers at the event.

Nelda Leyba Speller, AgriLife Extension county director for Bexar County, said the new urban farm and its facilities will allow AgriLife Extension, its sister agencies and the volunteer organizations it oversees to provide an array of education and outreach programs to benefit residents of Bexar County.

“I’d like to take this opportunity to thank Bexar County and the Bexar County Commissioners Court for entrusting the Texas A&M AgriLife Extension Service to cultivate not just soil into a harvest, but a residence in the community that all San Antonians can call their own,” Speller said. “We’re excited to have a new home from which we can continue to inform people about the importance of agriculture and the food we eat — and the connection these have to one’s health.”

Speller said programs at the urban farm will include those related to agriculture and natural resources, crop and animal production, ecosystem management, integrated pest management, 4-H and youth development, family and community health, and other quality of life issues.

“We have been working with AgriLife Extension, the county, nonprofits and other organization to make this happen,” said Cassandra Miller, secretary for the Harvard Place Eastlawn neighborhood association, which has been involved in project planning and coordination.

“This will be great not only for educating our kids about the importance of agriculture and where their food comes from,” said the former teacher. “It will also be great for adults, as the programs will help improve their health and wellness. This will be a tremendous benefit for an area that has been deprived for a long time and is ready for revitalization.”

Double your donation for education
November 24, 2020