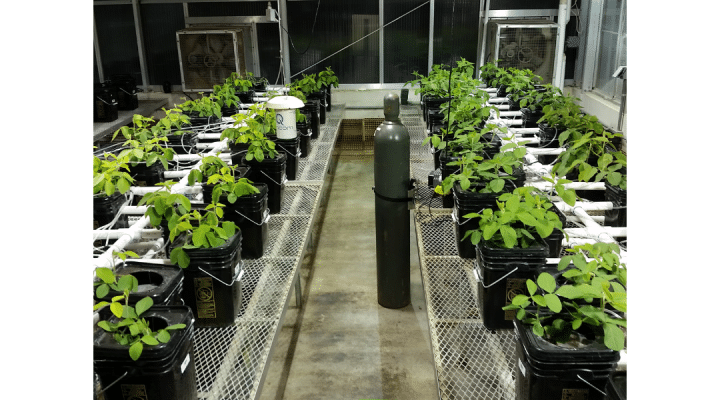 Carbon dioxide was pumped into the hydroponic system using a flowmeter. This delivers a specific amount of gas to the water. The research was conducted in a greenhouse, allowing for better control of variables, and faster research results than typical field studies. (Credit: Derrick J. Harrison)

WASHINGTON — If you’ve ever looked at food labels in your local grocery store, you’ve probably seen soy listed as an ingredient. Even though soy is widespread in our foods, that doesn’t make the production of soy any easier for growers. One challenge facing soy growers is flooding.

Flooding is a major cause of crop loss worldwide. As weather patterns change, experts expect severe weather events like flooding to occur more often. Luckily, the growers aren’t alone in facing this challenge. A study recently published in Crop Science found some answers which may be helpful to soy growers on land that is flood-prone.

Derrick Harrison and a team at University of Arkansas worked on the project. They conducted studies in greenhouses, which previous studies have shown to be reliable in breeding studies. This team was testing the reliability and consistency of screening germplasm in hydroponic systems in the greenhouse. The end goal was to determine how different varieties of soy react to flood conditions.

Greenhouse studies can control more variables than field studies, which are subjected to variable conditions. Uncontrollable conditions in the field, such as fungus or insects, produce symptoms in soy similar to flood stress. This can make the results of field trials less reliable than greenhouse studies. Greenhouse studies can be performed year-round, and yield results as quickly as five weeks, versus the typical 90-day cycle time for field system flood screening of soy in the Midsouth.

With these benefits in mind, the research team for this study designed several experiments. All experiments relied on hydroponic systems and were self-contained, offering more control. What first seemed like a tangle of tubing, air tanks, and potted plants, was organized and maintained by the team.

“In flooded conditions, plants are deprived of oxygen,” says Harrison. “Our system pumped carbon dioxide into the water under controlled conditions. Carbon dioxide can displace oxygen in the solution that would otherwise be available for plant uptake. Ambient air was pumped into the solution for the control group.”

The team tested four scenarios. The first test examined soilless mediums for starting soy from seed. The second test assessed the system’s reliability with a variety of soy known to be sensitive to flooding. The third test compared multiple varieties of soy for flood tolerance. Finally, the fourth test compared greenhouse trials with field trials.

“The greenhouse hydroponic system showed reliability, efficiency, and promise as a method for selecting soy based on flood tolerance,” says Harrison. “When compared to similar field trials, the greenhouse hydroponic system outperformed field trials. The new method allows for better viewing of results in a controlled setting.” This will help find flood-tolerant varieties in a faster, more reliable setting.

Importantly, the study confirmed prior research that determined six varieties of soy that were tolerant of flooding conditions. It also confirmed four that do poorly in low-oxygen environments. This can help inform soy farmers who live in flood-prone areas when choosing flood-tolerant varieties.

Although further validation of results is needed, this study marks an important resource for improving the water-logging tolerance of soybean. Screening for flood tolerance under hydroponics allows for the control of other abiotic and biotic stresses, is effective year-round, and is fast with a five-week cycle time.

The next plan is to test more varieties of soy plant materials in USDA collections using this hydroponic greenhouse system.

Crop Science is a publication of Crop Science Society of America. This research was supported by grants from the Arkansas Soybean Promotion Board, the Mid-South Soybean Board, and the United Soybean Board.