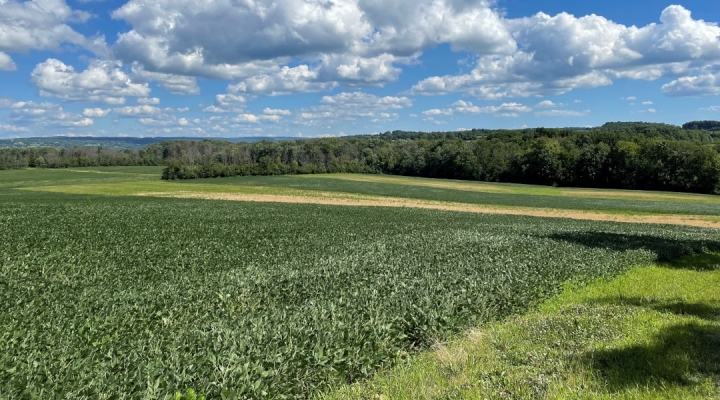 ALBANY — New York State Agriculture Commissioner Richard A. Ball and Department of Environmental Conservation Commissioner Basil Seggos today joined the Sand County Foundation to announce that Greenfield Farms of Skaneateles has been selected for the 2022 New York AEM-Leopold Conservation Award. The distinguished award honors a farm for its extraordinary efforts to promote and protect the environment through the preservation of soil and water quality while ensuring farm viability for future generations.

Greenfield Farms is located near Skaneateles Lake, which supplies drinking water for Syracuse and seven other New York municipalities. Jim, Tom, Bill, and TJ Greenfield utilize agricultural conservation practices to help their farm act as a 1,400-acre sponge, absorbing rain and snow melt and keeping topsoil in place. Jim Greenfield is one of the original leaders and farmer advocates of Syracuse’s Skaneateles Lake Watershed Agricultural Program.

Given in honor of renowned conservationist Aldo Leopold, the Leopold Conservation Award (LCA) recognizes farmers, ranchers and forestland owners who inspire others with their dedication to land, water, and wildlife habitat management on working land. The award is presented to landowners in 24 states. Since 2020, New York’s longstanding Agricultural Environmental Management (AEM) Award has been offered in collaboration with the nationally recognized Leopold Conservation Award® program.

Earlier this year, New York State Soil and Water Conservation Districts were encouraged to identify and nominate the best examples of conservation success in their district. Applications were reviewed by an independent panel of agricultural and conservation leaders. Among the many outstanding landowners nominated for the award were three additional finalists: Echo Farm of Essex in Essex County, Humbert Farms of Clyde in Wayne County, and Lawnhurst Farms of Stanley in Ontario County. Last year’s recipient was Table Rock Farm of Castile in Wyoming County.

Commissioner Ball said, “I extend my congratulations to Jim, Tom, Bill, TJ, and the whole Greenfield family for their exemplary efforts to protect and steward their land. Their innovative environmental practices, leadership, and dedication to giving back to their community are something to be admired and mirrored across New York State, and they are certainly most deserving of the esteemed AEM-Leopold Conservation Award.”

New York State Department of Environmental Conservation Commissioner Basil Seggos said, “Conservation and climate resiliency efforts at our local farms will help to protect the environment and preserve soil and water quality in New York State. Congratulations to Greenfield Farms for their well-deserved AEM-Leopold Conservation Award, which recognizes their leadership on preventing soil erosion, improving water quality, and using smart technology to grow and sustain their farm for future generations. Greenfield Farms serves as a great example of how New York’s agricultural community can help protect the environment and combat climate change.”

New York State Soil and Water Conservation Committee Chair Dale Stein said, “Congratulations to the Greenfield family on being honored with this distinguished award. Their work with the Onondaga Soil and Water Conservation District has helped them to implement measures to ensure soil health and water quality while maintaining farm viability. They are true examples of environmental stewardship in our New York State agricultural community.”

Kevin McAleese, Sand County Foundation President and Chief Executive Officer, said, “These award finalists are examples of how Aldo Leopold’s land ethic is alive and well today. Their dedication to conservation shows how individuals can improve the health of the land while producing food and fiber.”

John Piotti, American Farmland Trust President and Chief Executive, said, “As the national sponsor for Sand County Foundation’s Leopold Conservation Award, American Farmland Trust celebrates the hard work and dedication of the New York recipient. At AFT we believe that conservation in agriculture requires a focus on the land, the practices and the people and this award recognizes the integral role of all three.”

Mark E. Burger, Executive Director of the Onondaga County Soil and Water Conservation District, said, “Congratulations to the Greenfield Family for being recognized for four generations of outstanding agricultural and environmental conservation efforts. It is an honor and privilege to work side-by-side with you!”

The Greenfields say their topsoil is more valuable than any of the crops they grow.

Preventing soil erosion at Greenfield Farms is important because most of the farm’s corn, soybean, hay, oat, and wheat fields overlook Skaneateles Lake, which provides the drinking water for Syracuse and seven other New York municipalities. The rest of the farm drains toward Owasco Lake, which supplies drinking water for the City of Auburn’s 36,000 residents. Jim, Tom, Bill, and TJ Greenfield team up with the Onondaga County Soil and Water Conservation District, including the Skaneateles Lake Watershed Agricultural Program, and other conservation partners to put agricultural conservation practices to work, making their farm act as a 1,400-acre sponge that absorbs rain and snow melt and keeps topsoil in place.

Improving water quality through municipal-agricultural partnerships may be a new concept elsewhere in the nation, but Greenfield Farms and its neighbors have been part of such a public-private partnership for decades.

It was 30 years ago that the City of Syracuse had a choice: it could either build a $70 million water treatment plant (with an estimated $6 million annual operating expense), or it could begin cooperatively working with farmers and other landowners in the watershed to improve water quality before issues reached the existing plant. In collaboration with farmers like the Greenfield family, Syracuse opted to do the latter. At that time, Jim Greenfield was one of seven farmers who agreed to help encourage other landowners across the 37,952-acre watershed to voluntarily participate in the program.

As one of the original leaders and early adopters of Syracuse’s Skaneateles Lake Watershed Agricultural Program, Jim and his family started making changes to the way things were done at home. The Greenfields sold their mold-board plow in 2000 and were among the first farms in the area to invest in a no-till drill technology to plant crops. To improve their soil’s ability to infiltrate water, add organic matter, and reduce erosion, the Greenfields began planting cover crops.

The Greenfields established more than 12 miles of grassed waterways and edged all of their crop fields with grass buffers to provide yet another barrier to prevent runoff. They have also installed and maintain more than two miles of stabilized access roads at the farm to keep their tractor tires from bringing soil onto public roadways.

Their farm also features 20 water and sediment control basins that capture clean water and move it underground (away from potential contaminants) and release it safely to a stable outlet. By having a professional forester advise the Greenfields on the best management of their natural resources, their work additionally benefits the local forest industry and provides habitats for wildlife.

Greenfield Farms uses smart technology to help apply, by variable rate, the amount of lime, fertilizers, and other soil amendments required to grow crops. This technology showed them that shade from hedgerows eliminates the profitability of nearby rows of corn. After converting these under-producing areas to grassed buffers, they saved approximately $400 per acre in time, fuel, crop inputs, and topsoil resources.

Jim’s volunteer work with Syracuse’s Skaneateles Lake Watershed Agricultural Program and his family’s support on the farm for such efforts has not waned through the years. In addition to mentoring the next generation of board members, he gathered the sons and daughters of participants for a dinner meeting in 2017, where he explained how hard that he and his peers had to work to get the innovative partnership off the ground, and instilled in them why they need to carry it forward.