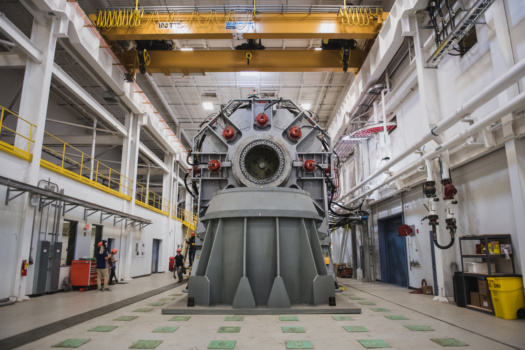 Clemson University researchers based in North Charleston have received $1.24 million from the U.S. Department of Energy to develop a new way to test a key piece of equipment on offshore wind turbines. The goal is to enhance their reliability, making them more cost-effective and attractive to build.

NORTH CHARLESTON, S.C. — Flooding at high tide has made Charleston one of the first South Carolina cities to directly feel the pain of climate change, so it’s fitting that a new green-energy research project is launching in the midst of the most vulnerable areas.

Clemson University researchers based in North Charleston have received $1.24 million from the U.S. Department of Energy to develop a new way to test a key piece of equipment on offshore wind turbines. The goal is to enhance their reliability, making them more cost-effective and attractive to build.

A team of researchers is doing its part to temper the effects of climate change in the Dominion Energy Innovation Center, a $110-million Clemson facility that opened six years ago at the former naval base in North Charleston.More wind power would make the world less reliant on fossil fuels that have been linked to climate change and sea-level rise. The rising water has contributed to more frequent flooding during high tide in Charleston and other coastal cities.

J. Curtiss Fox, the director of research facilities at the center, said it’s crucial to make offshore wind turbines as reliable as possible. They are located in windy, blustery environments, often far from land and difficult enough to reach that many come equipped with helicopter landing pads.

“To go out there and change a $5 part becomes a very expensive endeavor,” said Fox, the principal investigator on the grant funding the new research. “There’s very little margin for error or your operating costs go up dramatically.”

The new research project could provide a boost to a clean-energy source that already has some significant momentum. The global offshore wind market benefitted from rapid technology improvements and grew nearly 30 percent per year between 2010 and 2018, according to a new report from the International Energy Agency.

About 150 new offshore wind projects are scheduled to be completed around the world over the next five years, the agency found.

Some of the largest wind turbines are one-and-half times the size of the Washington Monument, with blades as long as a football field, according to the U.S. Department of Energy.

The new Clemson research is aimed at ensuring reliability, even as the wind turbines grow larger, Fox said. To do so, researchers over the next two years will sharpen their focus on the nacelle, the box that sits atop the wind turbine where internal components convert the energy from blade rotation into electricity.

Nacelles will be connected to sophisticated lab equipment that will simulate real-world conditions, such as strong ocean waves and gusty winds. The nacelles, thinking they are deployed in the field, will generate electricity and send it into the Duke Energy eGRID, a grid emulator located at Clemson’s North Charleston facility.

Researchers expect to be able to observe whether nacelle components start to show signs of abnormal operation which could affect lifetime or reliability. If they do, the team will adjust the controller, a computer inside the nacelle, to improve operation.

For example, if gusty winds cause speed changes that wear out certain components, the controller can adjust parameters such as blade pitch and speed to reduce wear and tear, making the turbine more reliable over the long haul.

The project is employing a testing strategy called “hardware-in-the-loop.” Using actual wind turbine energy-conversion components — the nacelle in this case — provides more realistic results than trying to simulate the hardware with a computer model. The “loop” refers to the computer program that simulates the wind, waves and electrical grid, and the interaction among them with the control system.

But what makes the new project especially unique is that for the first time anywhere researchers expect to be able to simultaneously test all three pillars of any wind turbine — the electrical generator, the mechanical wind capturing system and the software that connects them.

Randy Collins, Clemson’s associate vice president and director of research for the energy center, said the research could open new doors for wind energy around the world.

“The new testing method we are developing will help design and build the next generation of offshore turbines,” Collins said. “The theoretical, practical and industrial aspects are all coming together in this research. It’s a great opportunity to drive forward in testing capabilities and validate computer simulation models and controls with real-world environments.”

Daniel Noneaker, chair of the Holcombe Department of Electrical and Computer Engineering, said the project adds to a portfolio of research that is accelerating the development and deployment of wind turbine technology.

“These projects are providing new opportunities for our faculty and students to work on the cutting edge of a growing industry,” Noneaker said. “We are grateful to have the facilities and expertise that make this work possible.”

Anand Gramopadhye, dean of the College of Engineering, Computing and Applied Sciences, said that Clemson is the ideal place for the research.

“We have state-of-the-art facilities, and we work closely with industry partners,” Gramopadhye said. “Our faculty and staff know the direction the technology is headed. I congratulate the team on securing the grant. It is well-deserved.”