Home / New York / Great NYS Fair renames show ring in memory of Naomi Blumenthal
A new user experience is coming! We'll be asking you to login to your Morning Ag Clips account March 1st to access these new features.
We can't wait to share them with you! Read more here. 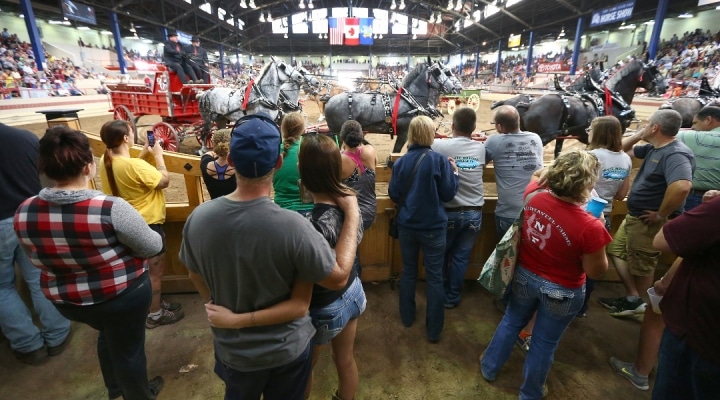 “It’s a big honor. My mother appreciated recognition, but would never expect something so permanent and wonderful,” said Shari Schneider, Naomi’s daughter. “I don’t remember a time when my mother wasn’t preparing for the Fair or working there.  She loved introducing horse shows to people who don’t normally see them. That was her pride and joy.” (New York State Fair / Michael Okoniewski)

SYRACUSE, N.Y. — The Great New York State Fair announced it will rename its show ring in the Toyota Coliseum on September 4, 2021 in memory of Naomi Blumenthal, who managed the Fair’s horse shows and promoted her own shows at the Toyota Coliseum for more than 40 years. A pillar of New York’s equestrian community and a mentor to many, Naomi was an equestrian studies teacher and coach at Cazenovia College, and additionally served as president of the National Professional Horsemen’s Association. Naomi was also recognized with a Lifetime Achievement Award by the Intercollegiate Horse Shows Association. She passed away in December 2020.

Troy Waffner, Fair Director, said, “Every time I walk into the Toyota Coliseum, I think of Naomi. It’s impossible not to. Naomi spent so much time in this building so it’s only fitting that the show ring, where horses will continue to entertain fairgoers each year, will bear her name. It will remind everyone of the tremendous impact one person can have.”

“It’s a big honor. My mother appreciated recognition, but would never expect something so permanent and wonderful,” said Shari Schneider, Naomi’s daughter. “I don’t remember a time when my mother wasn’t preparing for the Fair or working there.  She loved introducing horse shows to people who don’t normally see them. That was her pride and joy.”

Naomi’s work modernizing and managing multi-discipline competitions kept fans coming back to some of the most popular shows on the Fairgrounds. While her presence will be missed, her name will greet thousands of Fair visitors and riders for decades to come, all of whom have benefitted from her dedication to the industry.

At the 2021 Fair, families will get a chance to watch New York State’s best show horses compete inside the Toyota Coliseum. On August 29 at noon and 4pm, a horse pulling competition shows off the pure muscle power of draft horses. Winners pull the most weight for a short distance. During the afternoon break between shows, the Total Chaos Rodeo Drill Team will entertain the crowd. The group of female riders, based in Parish, NY, choreograph dance routines on horseback, with music.

The Toyota Coliseum is always buzzing during the four-day Draft Horse Show in the final stretch of the Fair, September 2-5. Fans can watch powerful teams of Belgians, Percherons, and Clydesdales competing. Seats fill up fast for one of the largest draft horse shows on this side of the Mississippi. The top hitches in the country are vying for a coveted spot in the North American Classic Six Horse Series Finals during this final qualifying weekend.

While competitions begin early in the morning, the Toyota Coliseum is open to the general public at 11 a.m., after the Fair gates officially open. The horse shows schedule is as follows, although subject to change.

Founded in 1841, the Great New York State Fair is America’s third largest state fair. The Fair showcases the best of New York agriculture, provides top-quality entertainment and is a key piece of the CNY Rising strategy of growing the Central New York economy through tourism. Fair attendance is up more than 46% since the beginning of more than $120 million in investments, with 1.33 million people attending the Fair in 2019. The 2021 Fair runs from August 20 to September 6.