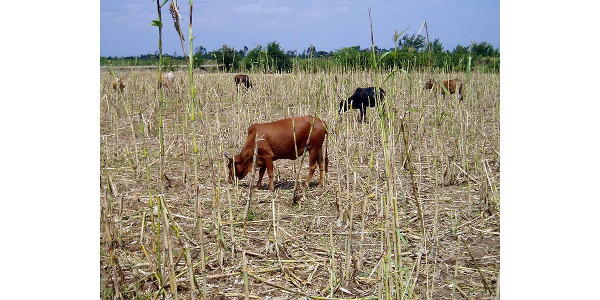 NORTH PLATTE, Neb. — There are sizeable acres of sorghum residue available for grazing this year and, similar to corn, sorghum stover can be a valuable winter forage. How does sorghum stover compare to corn residue for winter grazing?

Both corn residue and sorghum stover can sustain mid- to late-gestation cattle without supplementation during early grazing. Sorghum leaves have similar quality to corn husks and leaves. And just like corn residue, the quality decreases over time.

Unlike corn residue, sorghum stover has a threat of prussic acid toxicity immediately following a frost since sorghum plants are often still green at harvest. In fact, it carries the greatest risk of all sorghum species. Following a frost, it is important to wait 7 days after a killing freeze to make sure the possibility of prussic acid toxicity is reduced. The possibility of nitrate toxicity exists, especially if cattle are forced to graze the lower part of the stems.

Sorghum stover has a several positive characteristics compared to corn residue. Sorghum stems are a little higher in quality than the corn stem, but care is still needed if cows are forced to graze the lower stems. Sorghum stover is not on the ground like corn residue, so there is less loss to trampling and fewer issues with mud, if we have a wet fall. Sorghum stover also tends to remain above any snow that falls during winter. Finally, spilled sorghum grain is a little safer than corn and not as likely to cause acidosis or founder as corn grain.