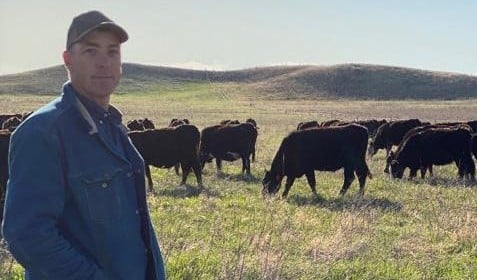 PIERRE, S.D. — The 2016 drought forced Shawn Freeland to make a difficult decision. “I sold two-thirds of our replacement heifers. It was the hardest thing to do because we had put a tremendous amount of work into their genetics,” says the 45-year-old Caputa, S.D. rancher.

He based his decision off what he learned about rangeland management while attending a Grassland Coalition Grazing School. In addition to reducing his stocking density on rangeland, he no-till drilled a diverse cover crop mix on irrigated hay acres.

“It was like tearing the Band-Aid off. My passion was the cattle. And I did a really good job of making nice cows, but they were super hard on the ground,” he explains. “Since then, I have learned it is the land that I am making money from, not the cows.”

All told, by focusing on rangeland and soil health, since 2016 Freeland has been able to cut his expenses by about $120,000 a year. “Profit isn’t the money you take off the top, it is the money that you save. Now that we don’t spend it, we have more of it.”

Freeland explains that by not tilling or haying, the ranch saves a lot on fuel and equipment.

Freeland’s operation, Dry Creek Farm & Ranch, is located 12 miles east of Rapid City. Depending on growing conditions, his herd numbers fluctuate between 300 and 400 cow/calf pairs. Throughout the spring and summer, he rotates pairs through rangeland at multiple locations: Caputa, Enning and the Buffalo Gap National Grasslands. Soil health goals and nutritional needs of the herd determine whether or not Freeland grazes cattle on cover crops in July and August.

“My grazing plan is not set in stone. I keep my options open. I don’t use the cows as a cash crop, we use them as a tool to achieve our goals – ultimately to improve the soil,” he says, explaining that sometimes he utilizes his cattle to trample a growing plant, like triticale or rye, into the ground to create residue which he can no-till plant into. Other times he uses the herd to help with erosion or hardpan issues by strategically locating their feed. “It is a different mindset. Instead of thinking, “I have to have these cows on this pasture by this date,” it’s like, “oh, there’s bare soil over here, lets put cattle on it and see what happens.’”

Typically, anytime from October to May, instead of feeding hay, his cows graze cover crops. “I used to spend the day doing endless chores. Feeding could take most of my day. I learned if I focus on the ground and making it better, it will cut back on labor. I still spend time each day managing my cattle, it’s just less time.”

Using polywire electric fence, he moves pairs about every three days through paddocks filled with diverse mixes containing as many as 15 warm and cool season species. “A couple feet of snow doesn’t affect them, and a diverse mix, with different heights, seems to break up the crust.”

In five short years, the land has responded. “Now there’s extra grass and I now see all kinds of different native species on the rangeland,” he says. “The first year I no-till planted triticale into an old alfalfa stand and grazed that, I noticed I had earthworms and all kinds of biology I never noticed before.”

Since he changed his grazing and land management, he also noticed improved herd health. “Think about it, each plant is doing something different. Each one is reaching down and getting a different mineral and making that available to the cows.”

In the past, Freeland used to finish up to 50-head each year on corn and direct market them under the Dry Creek Beef label. Today, he is able to finish the cattle on grass and his customers haven’t complained.

Recently, he began resting sections of rangeland. “One of my goals is to have 320 acres of rangeland resting every 18 months. I think it gives those plants a chance to really take off and show themselves.”

Setting goals and developing grazing management plans is among a long list of things he now has time to do because his days are not taken up with feeding chores. “Quality of life has been huge,” he says, explaining that he has more time to spend with his wife, Kristy and their teenage daughters.

Changing his herd and land management was not an easy decision. “It was like jumping off a cliff,” Freeland recalls. “It was a very scary deal for me to throw hay away and go with cover crops for grazing. I was extremely skeptical.”

The changes he made worked for him, and they can work for other livestock producers, says Sean Kelly, SDSU Extension Range Field Specialist.

On rangeland, Kelly explains by implementing a rotational grazing system where cattle never graze the same pasture during the same time of year, two years in a row, producers can stimulate species diversity. And a diverse mix of warm and cool season plants not only bolsters range health, but cattle also glean greater nutritional value.

“Healthy and diverse native rangeland has plants in their most nutritious growth curve,” says Kelly.

David Ollila agrees. The Newell sheep producer and SDSHC Soil Health Specialist has been implementing management practices on his ranch that he promoted during his years working as a SDSU Extension Sheep Specialist and Agriculture Education Instructor.

He practices rotational grazing on rangeland and no-till plants cover crops on old hayland. “I sampled cover crops before grazing them last September, and the samples came back 18-20 percent protein with TDN (total digestible nutrients) in the 50s and 60s.”

He explains every 1 percent of organic matter allows the soil to hold 20,000 gallons of water per acre. “Instead of removing that with haying, cover crops build it,” Ollila says.

The nutritional benefits of grazing cover crops late fall also boosted the fertility of Ollila’s ewes from 185 percent to over 200 percent. “I have so many more triplets that I had to buy an automatic bum lamb feeder.”

To view an expanded version of this article which includes Shawn Freeland’s cover crop mixes, visit www.sdsoilhealthcoalition.org/news/. You can also connect with a producer in your area that is implementing practices discussed in this article and who has volunteered to serve as a Soil Health Mentor.

For more articles out of South Dakota, click here.