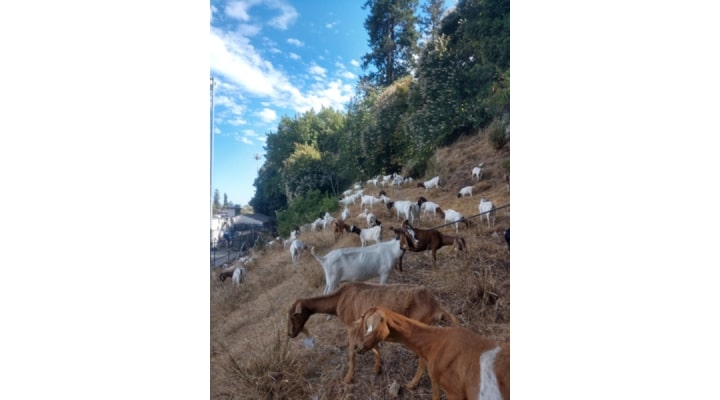 Campus Fire Marshal Nick Otis said it is critical for UC Santa Cruz to create vegetation buffers on campus that can slow down wildfires and reduce the risk of a catastrophic event. (Courtesy Photo)

SANTA CRUZ, Calif. — Hundreds of hungry goats have arrived to graze on about 30 acres of vegetation that would otherwise dry into potential wildfire fuel as summer arrives.

The goat herd, on campus until the last week of May, is just one part of a multi-pronged strategy to effectively manage the wildfire risk at UC Santa Cruz.

The campus partners with Cal Fire to conduct prescribed burns and maintain a shaded fuel break along Empire Grade, grazes and mows grasslands, and regularly works to educate members of the campus community about the danger wildfire poses to UCSC and the broader Santa Cruz community.

The UC Santa Cruz residential campus is in the wildland urban interface—the area in which natural landscape transitions into a developed environment. Campus Fire Marshal Nick Otis said it is critical for UC Santa Cruz to create vegetation buffers on campus that can slow down wildfires and reduce the risk of a catastrophic event.

The 2020 CZU wildfire, which destroyed more than 1,000 homes in the Santa Cruz Mountain and came within a mile of campus, underscored how dangerous and unpredictable wildfires have become because of climate change. It is the eighth most-destructive wildfire in the state’s history.

The goats will be eating down plants and shrubs as tall as six feet, significantly reducing the ladder fuels that allow a fire to envelop tall trees and grow even more destructive.

“This is a fresh approach to a real campus concern,” said Campus Fire Marshal Nick Otis. “I think we’ll be able to show real results.”

The goats will be at the UCSC Farm, the Chadwick Garden, the Quarry Amphitheater, and in some of the ravines with thick brush that are difficult to manage because of the steep topography. Except for bringing the goats to campus in trailers, the effort is free of any carbon emissions.

The goats will not be grazing on the Campus Natural Reserve or other areas with rare plants or on-going research projects.

The goats will be surrounded by a temporary electric fence to protect them from potential predators, such as mountain lions, Otis said. They will also be with a goat herder day and night.

Otis said he’s already in discussions with other UCSC land managers to see if grazing goats would help with vegetation management.