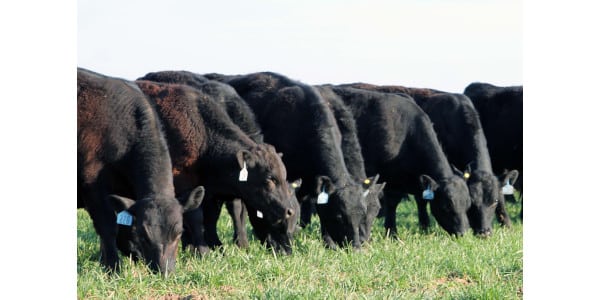 Calves that are grazing fescue pastures need to be closely monitored for endophyte toxicity. (Courtesy of K-State Research and Extension)

MANHATTAN, Kan. — We all have that one friend who eats the spiciest food and doesn’t seem bothered by it, while the rest of the people at the table break out into a sweat from the heat of the food. That friend has adapted well to the spice and they handle it with ease.

Much like humans, beef cattle can adapt over time to their grazing sources with proper management, but there are certain forages that can present issues for cattle, according to experts at Kansas State University’s Beef Cattle Institute.

“Fescue is a cool season grass that is drought tolerant and a good grazing option for cattle that are well adapted, but it can be infected with an endophyte that can make cattle sick when they are first introduced to it,” White said. An endophyte is a fungus that lives within the plant.

He added that the endophyte causes changes in the blood flow to the peripheries of the animal, such as their hooves, tails and ears. So, in the summer cattle that aren’t well adapted to fescue have trouble cooling, and in the winter, they are more prone to frostbite, according to White.

“Cattle that are experiencing fescue toxicity will often have rough appearing hair coats that don’t shed off, and they will not gain weight well,” Larson said.

Lancaster said that cattle raised on fescue pastures tend to handle the toxin better than those who have never been exposed to it.

“Over time we’ve selected animals in those environments that are more naturally adapted and tolerant of the endophyte toxin so the challenge is not as great for them,” he said.

If producers notice cattle experiencing toxicity from fescue, the experts agree the only option is to remove them from the pasture.

“There is no treatment for the vasoconstriction that is leading to the cattle’s poor performance and so the only choice is to get them off the fescue and provide some other forage or feed that will allow them to clear the toxin,” Lancaster said, adding it typically takes 6-8 weeks to fully clear their system.

To hear more of this discussion, listen to the Cattle Chat podcast online.

Wheat genomics discoveries have the potential to improve bread quality