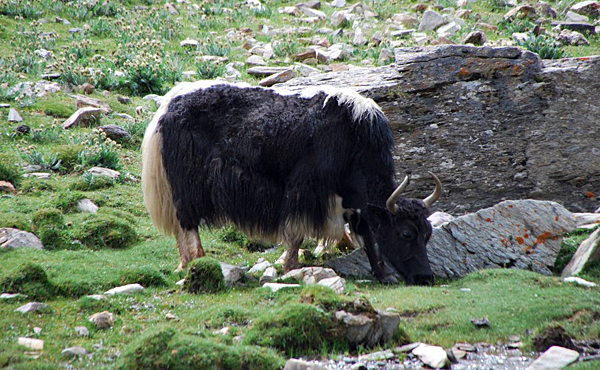 Large grazing animals have a strong selective force on plants, certain plants have evolved traits to thrive on pastoral landscapes. Spengler and Mueller theorize that yak herding may have helped drive buckwheat domestication in the southern Himalaya. This lone yak in the Lhasa region of Tibet is a significant evolutionary force on the plant communities around where it grazes. (Robert Spengler)

JENA, Germany — Many familiar grains today, like quinoa, amaranth and the millets, hemp and buckwheat, all have traits that indicate that they coevolved to be dispersed by large grazing mammals. During the Pleistocene, massive herds directed the ecology across much of the globe and caused evolutionary changes in plants. Studies of the ecology and growing habits of certain ancient crop relatives indicate that megafaunal herds were necessary for the dispersal of their seeds prior to human intervention. Understanding this process is providing scientists with insights into the early domestication of these plants.

The domestication of small-seeded annuals involved an evolutionary switch from dispersal through animal ingestion to human dispersal. Those are the findings of a new study by Robert Spengler, director of the Paleoethnobotany Laboratories at the Max Planck Institute for the Science of Human History, and Natalie Mueller, a National Science Foundation fellow at Cornell University, published in Nature Plants.

Spengler and Mueller demonstrate, by looking at rangeland ecology and herd-animal herbivory patterns, that the progenitors of small-seeded crops evolved to be dispersed by megafaunal ruminants. Although today the wild varieties of these species grow in small, isolated patches, the researchers illustrate that heavy grazing of these plants by herd animals causes dense patches to form near rivers or other areas that the animals frequent. In ancient times, these dense patches of plants could have easily been harvested, just like modern farmers’ fields — explaining how and why ancient people might have focused on these specific plants. This study provides an answer for this long-standing mystery of plant domestication.

Small-seeded crops are products of another age

During the mid-Holocene (7,000-5,000 years ago), in ecologically rich river valleys and grasslands all around the world, people started to cultivate small plants for their seed or grain. Wheat, barley and rice are some of the earliest plants to show signs of domestication and scientists have extensively studied the domestication process in these large-seeded cereal crops. Researchers know significantly less about the domestication of small-seeded grain crops, such as quinoa, amaranth, buckwheat, the millets and several now-lost crops domesticated in North America. The wild ancestors of these crops have small seeds with indigestible shells or seed coats. Today, these wild plants exist in small fragmentary patches dispersed across huge areas – the fact that they do not grow in dense clusters, like the ancestors of wheat and rice, would seem to have made these crop ancestors unappealing targets for foragers. The small seed sizes and hard seed shells, combined with the lack of dense wild populations, led many researchers to argue that they must have been a famine food.

Foraging enough wild seeds from these varieties to grind into flour to bake a loaf of bread would take weeks, especially for rarer or endangered crop ancestors. So why did early foragers focus so heavily on these plants and eventually adopt them as crops?

Spengler and Mueller present a new model, suggesting that when humans first encountered these plants, they would have grown in dense stands created by grazing megafauna, making them easy to harvest. As humans began to cultivate these plants, they took on the functional role of seed dispersers, and eventually the plants evolved new traits to favor farming and lost the old traits that favored being spread by herd animals. The earliest traits of domestication, thinning or loss of indigestible seed protections, loss of dormancy and increased seed size, can all be explained by to the loss of the ruminant dispersal process and concomitant human management of wild stands.

A novel model for the domestication of small-seeded grain crops

Spengler and Mueller have been interested in plant domestication since graduate school, when they studied under Dr. Gayle Fritz, one of the first scholars to recognize the importance of the American Midwest as a center of crop domestication. Despite decades of research into the nature of plant domestication in North America, no one recognized that the true key was the massive bison herds.

The plants that were domesticated, what Mueller calls the “Lost Crops,” would have been dispersed by bison in large swaths, making them easy to collect by ancient people and perhaps encouraging these communities to actively plant them themselves. When Europeans exterminated the herds, the plants that relied on these animals to disperse their seeds began to diminish as well. Because the wild ancestors of these lost crops are rare today and the bison herds are effectively extinct, researchers have overlooked this important coevolutionary feature in the domestication process.

However, this process is not unique to the American Midwest and the researchers suggest that there may be links between buckwheat domestication and yak herding in the Himalaya and amaranth domestication and llama herding in the Andes. The authors have identified parallel patterns in rangeland ecology studies, noting that heavy herd animal herbivory can homogenize vegetation communities. For example, heavy pastoralist grazing in the mountains of Central Asia causes many plants to die, but certain plants with adaptations for dispersal by animals thrive. The depositing of plant seeds in nutrient rich dung leads to ecological patches, often called hot spots, that foragers can easily target for seed collecting.

For over a century, scholars have debated why early foragers targeted small-seeded annuals as a major food source (eventually resulting in their domestication). Today, the progenitors of many of these crops have highly fragmentary populations and several are endangered or extinct. Likewise, without large dense homogenous stands of these plants in the wild, such as what exists in the wild for the progenitors of large-seeded cereal crops, it would have been impossible to harvest their seeds. The conclusions that Spengler and Mueller draw help explain why people targeted these plants and were able to domesticate them.

“Small-seeded annuals were domesticated in most areas of the world,” Spengler said. “So the ramifications of this study are global-scale. Scholars all over the world will need to grapple with these ideas if they want to pursue questions of domestication.”

Spengler and Mueller are continuing their research into the role that grazing animals played in plant domestication.

“Currently, we’re studying the ecology of fields where modern herd animals graze as proxies to what the ecology would have looked like during the last Ice Age, when large herds of bison, mammoths and wooly horses dictated what kinds of plants could grow across the American Midwest and Europe,” Spengler said. “We hope these observations will provide even greater insight into the process of domestication all over the world.”

— Max Planck Institute for the Science of Human History
via EurekAlert!