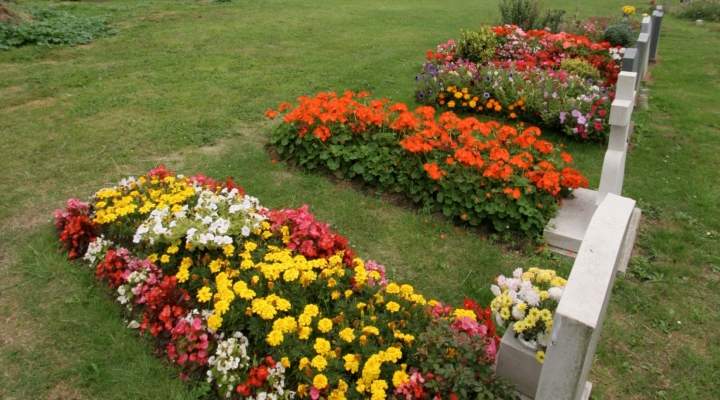 Cradle graves, stylish in the 19th century, have an upright stone where the name is etched, and an attached oblong planter that resembles a bathtub. It was common for relatives to plant and tend gardens in them. (Stock photo via Brian Snelson, Flickr/Creative Commons)

PHILADELPHIA — The cemeteries of yore existed as much for the living as for the dead. People would picnic and relax there as they would in a park today.

Amy Lambert, for instance, volunteers at The Woodlands, a cemetery near her apartment in Philadelphia. She had been looking for a way to garden after she moved out of an Austin, Texas, house with a lush backyard.

“This was an opportunity to get my hands dirty,” said Lambert, a 52-year-old architect.

She’s one of about 150 “Grave Gardeners” tending cradle graves at The Woodlands, a 54-acre cemetery where 30,000 people are buried. Cradle graves, stylish in the 19th century, have an upright stone where the name is etched, and an attached oblong planter that resembles a bathtub. It was common for relatives to plant and tend gardens in them.

Graveyards of that era, known as “garden” or “rural” cemeteries, were built on rolling hills outside of cities.

“They were inviting places,” said Leslie Wilson, a history professor at Montclair State University in New Jersey. “They were the precursor to these huge public parks we have today, like Central Park.”

Some cemeteries have informal gardening programs, while others require volunteers to submit applications. Staff horticulturalists often oversee the work.

The Victorian-era Oakland Cemetery in Atlanta relies on volunteer gardeners. There are at least 40 regulars who prune, weed, plant and manicure. They are supplemented by hundreds of occasional volunteers, often from corporations and schools. And Oakland solicits the public for one-day projects about six times a year.

Its volunteer program has been around for decades and has grown substantially in the past 10 years or so, says Sara Henderson, Oakland’s director of gardens.

“The core group, they’re very passionate about what they do and give countless hours to us,” she said.

American attitudes toward death and cemeteries have changed since the 19th century. Today, cemeteries are built with one thing in mind: burying dead people. Newer graveyards are built to house many rows of graves and flat stones that make mowing easier.

“You might go to a contemporary cemetery on Memorial Day but there’s no other reason to go,” said Jessica Baumert, executive director of The Woodlands and a historic preservationist. She got the idea for The Woodlands Grave Gardeners after reading about the 19th century custom of decorating cradle graves.

The Woodlands was the country estate of William Hamilton, a prominent horticulturalist. It became the final resting place for many politicians, wealthy businessmen, Civil War officers and Joseph A. Campbell, a founder of the Campbell Soup Company.

The grounds are also a vital part of the West Philadelphia neighborhood, and are popular with runners, dog walkers and picnickers.

“We’re trying to encourage people to use the cemetery in the way it was designed to be used,” Baumert explained.

The Woodlands’ Grave Gardeners program is in its fourth year, and every season it grows. The cemetery had to cap the number of volunteers at 150.

Some volunteers are paired up, and most look after a single grave. More experienced gardeners take on two or three.

“We’ve become good friends and really enjoyed working on this together,” said Maureen Cook, 68, of her gardening partner Greta Greenberger, 72. The pair, who did not know each other before, planted deep purple and burgundy flowers in the cradle grave of Andrew Craig, a wine importer.

There’s an approved list of plants from which gardeners can choose. The selection reflects the horticultural history of the site and the tastes of the Victorian era. Approved plants include snapdragons, hollyhock, iris, bear’s breeches and loves-lies-bleeding, a velvety-looking plant that was prized in Victorian gardens.

Lambert was assigned the Haseltine family plot, where three of seven members have cradle graves, and has enjoyed researching the family’s past. She found an obituary for Charles Haseltine (1840-1915) that called the art dealer an “irrepressible lover of puns.”

Some Haseltine descendants still visit the family plot every November to decorate the graves with red bows, she says.

Another Grave Gardener, Sherry Michael, a 47-year-old computer security analyst at the University of Pennsylvania, cared for the Evans family plot with fellow volunteer Alison Williams, 54. They worked together for two years, until Williams died of cancer this year. In her memory, the Grave Gardeners planted a rose bush on the Evans plot.

“Working at a cemetery gives you lots of thoughts,” Michael said. “Your day-to-day issues don’t seem as big because you’re reminded life is so fleeting.”