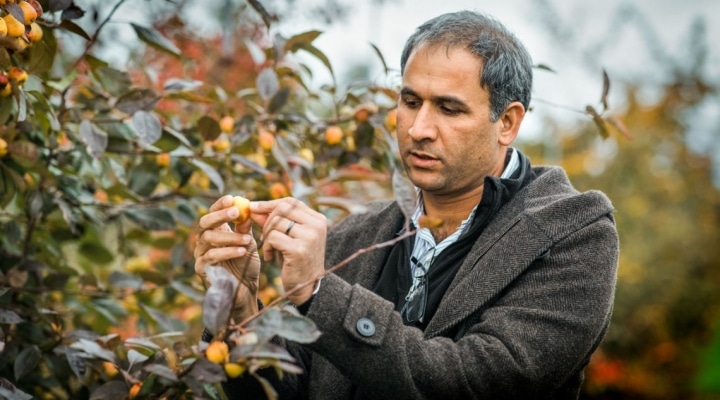 ITHACA, N.Y. — The U.S. Department of Agriculture’s National Institute of Food and Agriculture has awarded a $779,000 grant to Cornell AgriTech researchers to combat fire blight, one of the most devastating bacterial diseases for the apple and pear industries.

This fall, Awais Khan and Kerik Cox, associate professors of plant pathology and plant-microbe biology, will start working with collaborators from across the U.S. on a four-year project to develop a comprehensive fire blight management strategy for American fruit growers.

Cox’s goal is to better understand the first stage of the disease, called blossom blight.

“The most critical time period is the blossom phase because the blossom is the pathogen’s first means of entry into the tree,” he said. “Even just a few infected blossoms can lead to complete orchard devastation in a matter of weeks.”

Cox will assess the genetic response that occurs in apple trees following treatment with a variety of natural and synthetic defense inducers during the blossom phase in order to improve application timing and efficacy under changing environmental conditions and newer cultivars.

Defense inducers turn on plants’ natural defenses, allowing them to effectively wage biochemical warfare against invading pathogens like fire blight. Because the plant defenses attack numerous bacterial processes, the practice is considered sustainable because bacteria are unable to evolve mutation to overcome them all simultaneously.

Additionally, Cox plants to test plant growth regulators, which are hormones that can be used to promote or delay ripening, and enhance or retard vegetative growth. Cox will use these regulators to slow shoot growth when trees are at high risk for infection. The approach causes apple trees to be less suitable for infection and colonization by the fire blight bacterium, which dies without a host.

Pre-breeding lines are combinations of desirable genes from different cultivated and wild apples that breeders like Susan Brown, the Herman M. Cohn Professor of Agriculture and Life science, can use to produce new cultivars for apple growers.

“Most of the newer apples released in the U.S. are highly susceptible to the disease even though they are what consumers are looking for in terms of taste,” said Khan. “Pre-breeding lines help breeders develop varieties that have both the taste consumers want and the resistance growers need.”

To produce the lines, Khan will take fire blight resistant genes, found in wild apples, and make crosses with high-quality apples. Additional crosses will then be made until Khan has achieved maximum quality and resistance.

Rapid cycle breeding involves the use of an early flowering gene found in birch trees, which Khan will cross with fire blight resistant wild apples. The resulting plant will flower in just one year; normal cross breeding would take five years.

“We’re hoping to give growers more ammunition against one of the biggest threats they face in orchards today,” Cox said. “The most rewarding element of this project is that our work will not only benefit New York growers, but the entire U.S. apple industry.”

Erin Rodger is the senior manager of marketing and communications for Cornell AgriTech.

USDA allocates up to $10M to assist producers impacted by drought
April 14, 2021