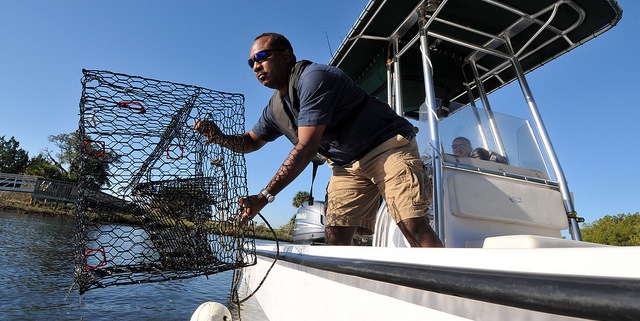 GAINESVILLE, Fla. — A researcher at the University of Florida Institute of Food and Agricultural Sciences wants to study the blue crab and a viral pathogen that infects it. Now, a nearly $1 million grant from the National Science Foundation will help Donald Behringer and colleagues study the disease along the entire western Atlantic seaboard.

In Florida, several disasters—including hurricanes in 2004, 2005, and 2008, and the Deepwater Horizon oil spill in 2010—have impacted the blue crab population, the Florida Fish and Wildlife Conservation Commission states. The virus has also added to the decline of blue crab. According to the Gulf States Fisheries Commission, by 2013 blue crab harvest totaled 46.5 million pounds with dockside revenue of $61.3 million. This is down from a peak of 70 million pounds through 2000.

“The blue crab is found from Maine to Argentina and is heavily fished through most of this range,” said Behringer, associate professor with a joint appointment in the UF/IFAS School of Forest Resources and Conservation and the Emerging Pathogens Institute. “In addition to its high economic value, the blue crab fills an important ecological role as a predator, scavenger and prey item for other organisms in the coastal food web.”

Behringer and colleagues from the University of Maryland and Shedd Aquarium in Chicago will study how the pathogen affects blue crabs and how the relationship varies with latitude, climate and oceanographic conditions from the northern to southern hemispheres. The research team will integrate hydro-acoustic tracking, laboratory experiments, cutting-edge genetic techniques and oceanographic modeling to answer fundamental questions about how pathogens and hosts interact across large swaths of the ocean.

Behringer and his graduate students will lead the studies on crab behavior and the interaction between crab life history, climate and virulence of the virus. For example, blue crabs that live in waters from Maine to North Carolina go dormant in the wintertime, but those that live in southern regions are active all year long, Behringer said. “We hypothesize that these differences, or ‘life history’ of the crab, will drive differences in the evolution of virulence of the virus,” Behringer said.

The team plans to produce genetic data for the blue crab and virus populations, Behringer said. “The grant will allow us to study how the pathogen and host have co-evolved over the vast oceanographic expanse where they exist,” he said.

The UF/IFAS team will host workshops to teach fishermen best practices to avoid spread of the virus. “The blue crab is an important fishery and significant part of Florida’s economy, and we want to help the industry manage this pathogen where possible,” Behringer said.

Florida Orange Production Up in May Forecast
May 12, 2022