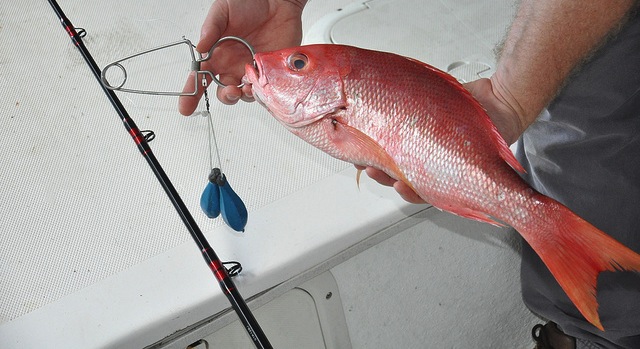 Red snapper has been considered overfished in the Gulf of Mexico since the 1980s, and is currently under a federal recovery plan. (Florida Fish and Wildlife, Flickr/Creative Commons)

GAINESVILLE, Fla. — Two University of Florida Institute of Food and Agricultural Sciences researchers will be part of a $10 million project to estimate the number of red snapper in the Gulf of Mexico. The National Oceanic and Atmospheric Administration, National Marine Fisheries Service and Sea Grant are funding the study.

Robert Ahrens and Will Patterson, both associate professors in the UF/IFAS School of Forest Resources and Conservation, will join researchers from multiple institutions around the Southeast for the two-year project.

The study is a response to a dispute over current population estimates, Ahrens said. Red snapper is valued throughout the Southeast by commercial and recreational groups, he said. It has been considered overfished in the Gulf of Mexico since the 1980s, and is currently under a federal recovery plan, he said.

Formal assessments are conducted every few years to estimate population and stock status. Despite rigorous methodology and vetting, some members of the recreational fishing community argue that the red snapper population is higher than scientists estimate, Ahrens said. These fishermen would like fishing restrictions relaxed, he said.

Patterson said recent “corrective” studies that have challenged the assessment in one respect or another have supported prior assessment results.

“What it may come down to is we have more fishermen, and a greater ability to catch fish, than there are fish to be caught,” Patterson said.

For the project to be a success, the grant stipulates the research team must achieve a population size estimate with a coefficient variation of 30 percent. This means, if researchers take a set of samples in one habitat, and the number of snapper varies dramatically between spots, they must do supplementary samples until the numbers contract into an acceptable range.

Ahrens said the significant cost incurred during sampling can make this unaffordable.

Although $10 million is a considerable grant, Ahrens said the size of the Gulf, and the work and funds required to measure fish in a region that massive, have some people doubting whether they can achieve their goals.

“No one’s ever really done something like this,” Ahrens said.

Another challenge is red snapper physiology. They have swim bladders, which keep them neutrally buoyant. This means, if they are brought to the surface too quickly, the gas inside the swim bladders can expand and kill them.

Rather than rely on catch-and-release, researchers must use other methods to estimate fish numbers, such as remote-operated vehicles, camera sleds, human divers and acoustics. Researchers will also be capturing some fish, and taking fin clips to develop genetic tags to be used in future estimates of population size.

The research team will spend the first phase of the grant calibrating their counting methods. Ahrens said they need to study how the fish respond to the estimation tools, as methods that spook the fish will yield inaccurate numbers.

“We’ll be taking thousands of trips into the Gulf,” Ahrens said. “We’ll take hundreds of trips on the West Florida Shelf.”

Although the purpose of the study is to estimate red snapper population size, researchers are excited about the additional pursuits offered by a project of this scale.

They plan to study distribution of reef fish, the size of fish across the shelf and into deep water and lionfish distribution.

Invasive lionfish were first sighted in the Gulf in the mid-2000s, and now certain habitats in the northern Gulf have the highest lionfish densities of anywhere on Earth, Patterson said. Up until now, researchers have only used SCUBA gear out to 133 feet to capture them, but models are showing they need to go deeper to have any hope of mitigating their expansion.

“We don’t know what the lionfish population is doing in deep water,” Patterson said.

Researchers also want to study how native fish behave around the invasive lionfish. Preliminary research has shown fish that typically congregate around reefs tend to stay farther away when lionfish are around. Patterson thinks it’s because the lionfish eat all the food by the reef, forcing the other fish to travel farther to get their fill.

“In the course [of the study] we’re going to produce a lot of other information about a lot of other things that will likely be an important legacy of this funding,” Patterson said.