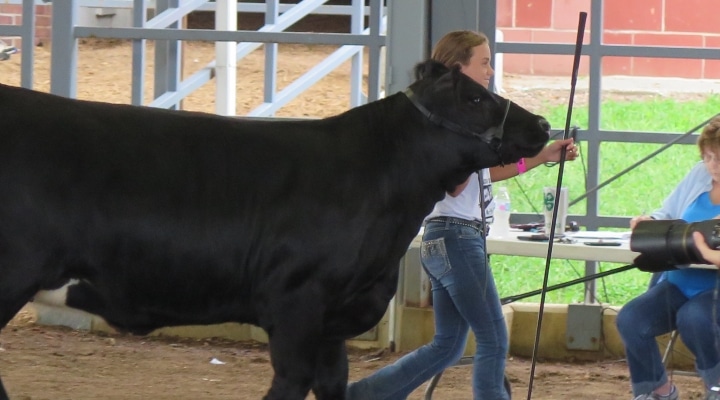 Payton Rodgers, daughter of Blaine and Melissa Rodgers, is the exhibitor of the 2021 Grand Champion Market Steer at the Missouri State Fair. Payton is from Savannah, and is a member of the Kodiak Kadets 4-H Club. Payton’s prize-winning crossbred steer weighed 1305 pounds. (file photo from 2019 by sheffield, creative commons/flickr.com)

SEDALIA, Mo. – Payton Rodgers, daughter of Blaine and Melissa Rodgers, is the exhibitor of the 2021 Grand Champion Market Steer at the Missouri State Fair. Payton is from Savannah, and is a member of the Kodiak Kadets 4-H Club. Payton’s prize-winning crossbred steer weighed 1305 pounds.

The Reserve Grand Champion Market Steer honor went to Lucas Leefers of Edgerton. He is the son of Doyle and Kristen Leefers and is a member of the Hoover Heroes 4-H Club. Lucas’s market crossbred steer weighed 1330 pounds.

Many livestock exhibitors will work toward earning a place in the ring at the time-honored Sale of Champions Auction. Grand Champion and Reserve Grand Champion Steers, Barrows, Lambs, Meat Goats, Pens of Chickens and Pens of Rabbits will be featured in the auction, along with the Grand and Reserve Grand Champion Hams and Bacons. The Sale will be held at 1:30 p.m., Saturday, Aug. 21, in the Lowell Mohler Assembly Hall. The entire auction will be broadcast live by KMMO radio online and video streamed live by Carter Media at midvid.com. Updates and interviews will be available on KMZU the Farm, 100.7. FM. The auction will also be live on the Missouri Department of Agriculture’s Facebook page and live online bidding will be available via LiveAuctions.tv . For more information regarding online bidding please visit the State Fair website.

Perennial of the Year steeped in American patriotism