Home / National / Grain leaders visit Mexico to meet customers
A new user experience is coming! We'll be asking you to login to your Morning Ag Clips account March 1st to access these new features.
We can't wait to share them with you! Read more here. 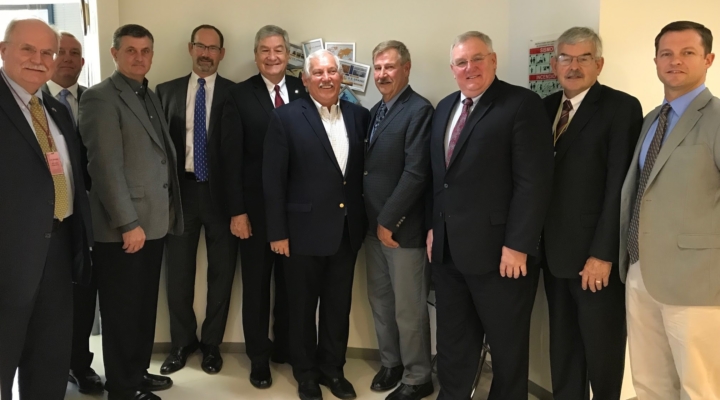 MEXICO CITY — Leaders from the U.S. feed grains value chain traveled together to Mexico last week to meet with longtime customers and incoming officials from the Mexican government on the heels of the recently-concluded U.S.-Mexico-Canada Agreement (USMCA) negotiations.

Mexico is the top foreign buyer of U.S. corn, distiller’s dried grains with solubles (DDGS) and barley and a significant buyer of U.S. sorghum. The country also holds near-term potential for increased use of U.S. ethanol following energy policy changes in recent years.

“Mexico is the most critical market for our members and an amazing example of what the right combination of policy and robust market development can do to build overseas grain demand,” said USGC Chairman Jim Stitzlein, an agribusiness member of the Council who participated in the recent mission. “Engaging with our customers in Mexico is always a priority, and we are excited to visit and show we are back to business as usual now that the USMCA agreement is ready to go.”

In 2017/2018, shipments of feed grains in all forms – a holistic measure of the grain consumed by a market as a commodity or in value-added products – to Mexico hit a new record of 25.2 million metric tons – almost 1 billion bushels in corn equivalent. That sales figure was up 6.3 percent year-over-year based on competitive prices and strong logistics.

“Corn farmers value the strong relationships we have built with our trading partners. Being able to meet face-to-face with incoming Mexican administration officials shortly after the USMCA was announced helped to cement our commitment to maintaining and building upon these trading relationships,” said NCGA CEO Jon Doggett. “We look forward to Mexico continuing to be a strong market for U.S. corn.”

Relationships between the U.S. feed grains industry and these groups run deep, having been built over more than 35 years of the Council’s presence in the market and reinforced through the process of negotiating a modernized North American Free Trade Agreement (NAFTA) over the past 18 months.

As the new presidential administration of Andrés Manuel López Obrador, known as AMLO, prepares to take office on Dec. 1, deepening existing partnerships and building new ones is even more critical.

“In light of today’s trade uncertainties around the world, it is always important to meet and maintain our relationships with our key customers. Mexico has a long history as a key customer for sorghum and other U.S. grain products. With the new administration soon to come to power, we must continue to work on maintaining a strong, positive relationship that helps our producers,” said NSP and USCP Chief Executive Officer Tim Lust.

While in the country, the joint leadership team visited with USDA’s Foreign Agricultural Service (FAS) post in Mexico City; met with key customer organizations including the Mexican feed manufacturers’ council, known as CONAFAB; and made a stop at the Mexican grain trade association, known as APPAMEX. They also met with officials already appointed by the new president-elect, including Victor Villalobos, the incoming head of the agriculture department.

“Mexico is a primary market for North Dakota barley and U.S. barley and malt. The years we have spent relationship building coupled with dedicated supply chain management and strong trade policy have resulted in solid business opportunities for U.S. growers and the brewing industry. We were happy to meet with customers on this mission,” said Greg Kessel, a leader at the North Dakota Barley Council who traveled with the team.

The Council works in more than 50 countries globally to promote the export of U.S. feed grains and related products, including corn, sorghum, barley, DDGS and ethanol. Its membership includes checkoff and policy organizations for all five commodities as well as more than 150 agribusinesses that contribute funds matched by dollars allocated from programs authorized in the U.S. farm bill.

More information about the Council’s programs in Mexico is here.

Putting marginal farmlands to good use