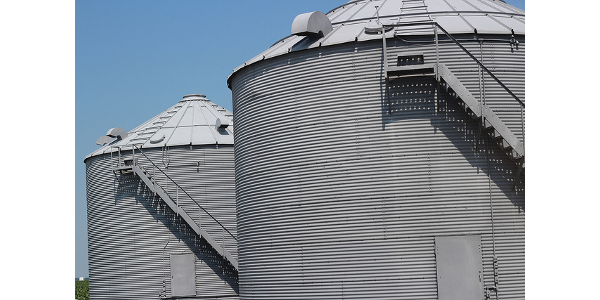 Grain entrapment is a huge risk on farms, and accidents with it almost always end in tragedy. Remember that life can change in the blink of an eye, so keep yourself and your family safe by reviewing the dangers of the farm--and how to avoid them. (United Soybean Board via Flickr)

ST. CLOUD, Minn. — We probably know at least one story of someone being killed in a grain entrapment accident. There are always a few particularly tragic stories that come to mind for me. These kinds of accidents really hit home for me, as I think of all the times my sister and I played in gravity boxes full of corn when we were little girls. As farm kids, that was a part of our lives–and we loved playing in the corn during harvest. We only thought about the fun, never the danger.

On average, nearly two dozen people are killed each year in the U.S. in grain entrapment incidents.  Flowing grain is dangerous and behaves much like quicksand.  In 4 seconds, a full-grown adult can sink knee deep from the suction of flowing grain.  In just 20 seconds, they can be completely buried.  The pressure of the grain usually hinders self-escape and can even make assisted escape near impossible.  A person buried to the waist in grain requires a force equivalent to their own body weight plus 600 pounds to free them.  The force required to remove a person buried under grain can exceed 2,000 pounds.

Let’s talk through some grain handling scenarios that are incredibly dangerous and could result in an accident or even death.

The first is flowing grain.  Around 80% of reported engulfments involve a person inside a bin when grain-unloading equipment is running. Engulfments in flowing grain can also occur in outdoor storage piles, grain wagons, rail cars, and semi-trailers that unload from the bottom.  As grain is unloaded through the bottom outlet, a funnel-shaped flow develops on the surface of the grain. Anyone standing on the surface while grain is being removed from below is at risk of being rapidly pulled down toward the outlet with the flowing grain. Submersion takes only seconds and once it begins, the pressure and friction forces of grain on the body are virtually impossible to overcome. If grain unloading equipment is not shut off, victims can be pulled down into the unloading conveyor, auger, or sump.

Another dangerous scenario is bridged grain.  Spoiled grain clumps together and can develop a crust on the top surface. This crust appears solid, but it is unstable and may hide open voids below that develop as grain is removed. Bridged grain can collapse under a person’s weight, resulting in the victim being buried by falling and shifting grain. If unloading equipment is running at the time this occurs, the victim can be rapidly pulled down toward the bottom of the bin.

There is also a high risk when using grain vacuums to remove grain from bins. When the grain vacuum nozzle is placed below the grain surface, a funnel flow of grain develops. An operator can be pulled into the downward flow of grain if this nozzle is released or becomes buried below the grain surface near the operator’s feet.  Maneuvering the vacuum tube can be awkward, increasing the operator’s risk of slipping or losing balance as he or she tries to reposition the hose in flowing grain.  If the operator falls or struggles for position, his or her movements can trigger an avalanche of grain if the slope of grain is steep.

So, what are some safety precautions we can take to prevent grain-related incidents?

First, manage grain to prevent spoilage.  The most common reason people enter bins is to address problems associated with spoiled grain. To reduce the chance of grain spoilage, maintain aeration equipment in working order and check the structure to identify and fix roof leaks.  Also, store grain at the correct moisture content and temperature to prevent conditions favorable for grain to spoil.

Second, work from outside the bin. If clumps or crusts develop in the grain, use a pole from outside the bin to probe or knock the clump free.  Restrict access to bins, storage structures, and outdoor grain storage piles.  Post signage and lock access doors so unauthorized persons, bystanders, and youth cannot enter.  Also, post signage at all entry points to bins, outdoor storage piles, and other storage structures that warn of potential for engulfment and require any entry to be done by trained workers following safe procedures.

Third, create a safe environment for you and anyone working on your farm.  Provide training to all employees on the dangers of grain handling and what the safety precautions are.  Have an emergency rescue plan in place and make sure all employees know what it is and what they need to do if it is put into action.  Shut down and lock out all grain handling equipment and turn off all power sources when not in use.

Fourth, if you absolutely must enter a bin or other grain storage area, take proper safety precautions.  Always visually inspect the grain bin or storage area before entering it.  Never enter alone–have at least one other person in a safe position watching you and there to help, in case something goes wrong.  Also, use fall restraint equipment and make sure it is properly anchored.  These systems consist of a full body harness attached to an anchored line, which limits the distance the entrant can drop or fall.  Most importantly, NEVER allow someone who has not been trained to enter a bin with you or with anyone else.

Grain entrapment is a huge risk on farms, and accidents with it almost always end in tragedy. Remember that life can change in the blink of an eye, so keep yourself and your family safe by reviewing the dangers of the farm–and how to avoid them.