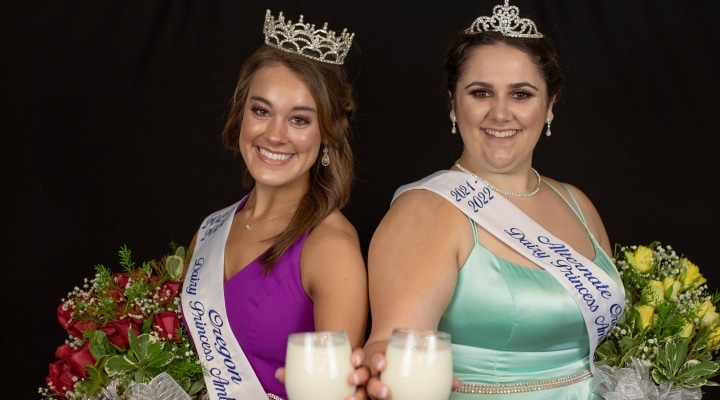 Krahn, 19, a 2020 graduate of Santiam Christian High School, now attends Linn-Benton Community College where she studies Animal Sciences. She aspires to transfer to a four year university and combine her on-farm experiences with skills in agricultural communications to lobby for dairy farmers. An accomplished student, Krahn was involved
in cheerleading, was very active in FFA and most recently served as the 2019 National Jersey Queen.

Upon being crowned, Krahn received $3,000 in scholarships to continue her education. Outgoing Dairy Princess-Ambassador Jaime Evers received $10,000 for her year dedicated to the Oregon dairy industry.

Bella Giraud representing Benton County was named Alternate Oregon Dairy Princess- Ambassador. Also a recipient of scholarships, Giraud will play an important role assisting in the promotion of the dairy industry throughout the state in the coming year.

Prior to the state contest on Saturday, the Oregon Dairy Women also named the incoming county dairy princess ambassadors all of whom will serve a year and compete next spring for the state titles. These young women include Jess Hewitt of Clackamas County, Krisarah Nygren of Linn-Benton Counties, Mariana Llamas of Tillamook County, Mia Berry of Washington County and Hanna VanDeWalle of Yamhill-Polk Counties.

Oregon Dairy Women (ODW) is an all-volunteer, non-profit organization with the main objective to promote the dairy industry. The ODW mission is to promote greater use of all dairy products through outreach and educational programs.

Since 1959, the Oregon Dairy Women’s Dairy Princess Ambassador Program has served as the premier advocate for the Oregon Dairy Industry in collaboration with the Oregon Dairy Farmers Association and the Oregon Dairy Nutrition Council. The ODW award scholarships, and provides financial support to 4-H and FFA programs, Agriculture in the Classroom, Ag Fest, Summer Ag Institute, Adopt-a-Farmer and judging teams.

Gear up with promotional resources from ALB