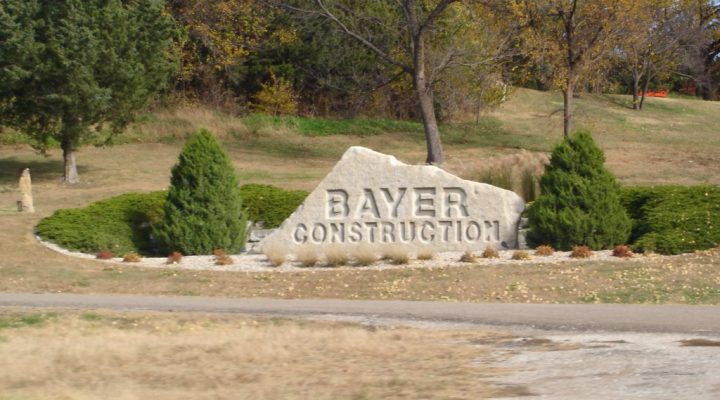 MANHATTAN, Kan. — For the fifth time, Bayer Construction Co. Inc. located in Manhattan was awarded the 2016 Governor’s Mined Land Reclamation Award presented at the 2017 Kansas Aggregate Producers Association annual convention in Overland Park, Kan., on January 13. This award is presented by the Division of Conservation in the Kansas Department of Agriculture to recognize a company that demonstrated excellence in implementing mined land reclamation and conveying a positive image of mining in Kansas.

Bayer Construction’s Martin Quarry is located in Clay County and has been in operation since the 1950s. It has been the primary source of limestone aggregates for 10 north-central Kansas counties. The reclaimed area consists of 94 acres and was reclaimed in phases from 2011–2016. The reclamation plan developed with the landowner outlined how the property would be reclaimed into productive cropland. Bayer used heavy equipment to contour the land and spread stockpiled topsoil. To maintain productivity of the farmland, Bayer built a waterway to assist in proper drainage and reduce soil erosion. “Bayer Construction Company wants to be a strong partner in the community and holds itself to a high environmental stewardship standard,” said Stan Hambright, safety and environmental manager for Bayer Construction.

The KDA’s Division of Conservation administers the Surface Mining Land Conservation and Reclamation Act as part of its mission to protect natural resources. It offers this annual award to raise the awareness and standards of reclaiming mined land and to recognize excellence.

For more information about the award or about mined land reclamation in Kansas, contact Scott Carlson with the DOC–KDA at 785-564-6618 or scott.carlson@ks.gov.