Home / Iowa / Governor’s Charity Steer Show set for August 10
A new user experience is coming! We'll be asking you to login to your Morning Ag Clips account March 1st to access these new features.
We can't wait to share them with you! Read more here. 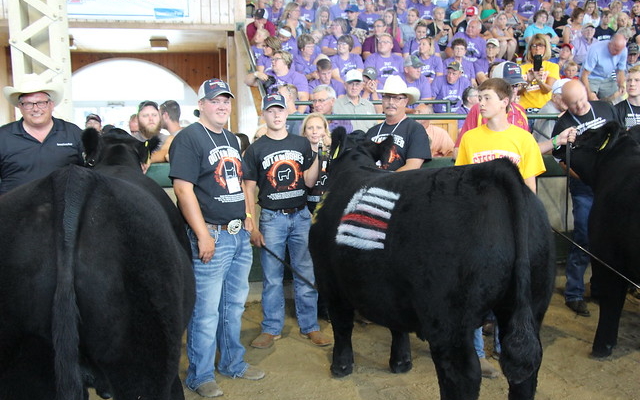 This year, the show ring competition takes place Saturday, Aug. 10, at 4:00 p.m., in the Pioneer Livestock Pavilion at the Iowa State Fair. Celebrities will lead 25 steers around the ring, vying for the championship designation, showmanship honors, and the People’s Choice award.

Immediately following the competition, the steers will be sold at auction with proceeds going to the Ronald McDonald House Charities of Iowa. Both the show ring event and the auction are open to the general public.

Since the Iowa Beef Industry Council and the Iowa Cattlemen’s Association began the Governor’s Charity Steer Show in 1983, the effort has raised more than $3.5 million for the Des Moines, Iowa City and Sioux City Ronald McDonald House Charities. The houses provide a “home away from home” for families of seriously ill children being treated in area hospitals and have served nearly 47,000 families.

Each of the 25 steers are owned by Iowa youth who have cared for the animals and participated in other shows with them. The youth prepare the animals for the show and assist a celebrity in the show ring. Sponsors reimburse the youth for the cost of the animal and choose the celebrity.

Youth participating in the 2019 Governor’s Charity Steer Show will also learn additional information about the beef industry on Thursday, and volunteer some time with the Ronald McDonald House Charities in Des Moines on Friday, Aug. 9.

Can’t make it to the show? Watch for coverage of the event from our media partners. WHO’s The Big Show will once again broadcast live before and after the competition. Ag News Daily and Iowa AgNet (Iowa Agribusiness Radio) will be covering the event as well, broadcasting live on the GCSS facebook page: https://www.facebook.com/iowagcss/

A new website has been created to raise the awareness and impact of the Governor’s Charity Steer Show. Iowans interested in helping with the cause can donate online at www.iowagovernorscharitysteershow.com and support the efforts of the beef industry.