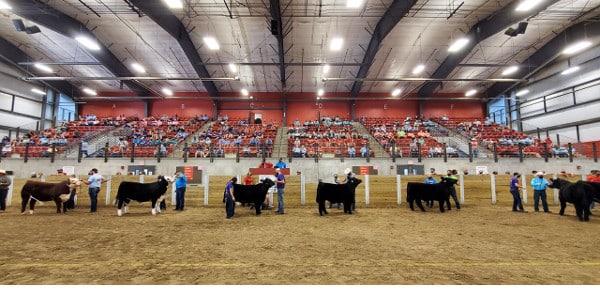 Despite months of uncertainty, the Iowa cattle industry and supporters came together on August 15 for the 38th annual Iowa Governor's Charity Steer Show. (Courtesy of Iowa Cattlemen's Association)

AMES, Iowa — Despite months of uncertainty, the Iowa cattle industry and supporters came together on August 15 for the 38th annual Iowa Governor’s Charity Steer Show. This year’s event raised over $254,000 for the Ronald McDonald House Charities of Iowa.

The show and auction, which were held at Iowa State University, are an annual fundraiser for the Ronald McDonald Houses in Des Moines, Iowa City and Sioux City. The houses are located near hospitals and provide a “home away from home” for families of seriously ill children. The Iowa Beef Industry Council and Iowa Cattlemen’s Association sponsor the annual steer show and auction.

Since its inception in 1983, the Governor’s Charity Steer Show has raised over $4.1 million for the Ronald McDonald Houses of Iowa. This year’s event included 23 steers, the Iowa youth who raised them and celebrity show persons. Governor Kim Reynolds was expected to participate, but storm relief efforts after this week’s Derecho kept her from the show. First Gentleman Kevin Reynolds showed in her place, taking home Grand Champion honors with the steer raised by Tyson Von Glan of Vail. Reynolds’s steer was chosen by judge Chad Holtkamp of West Point, Iowa.

The steer raised by Rylie Timm and shown by Tate Schafer and Boone Myers was chosen by voters on Facebook as People’s Choice. Tate has a rare brain tumor, but celebrated his thirteenth birthday and 20 months post-diagnosis earlier in August.

Emcees for the event included Bob Quinn and Andy Peterson of WHO/WMT Radio and Michelle Rook of WNAX Radio. The auctioneers were Phil Schooley of Bloomfield, Russele Sleep of Bedford, and Jared Miller of Leon. Catching bids in the ring were Tom Rooney and Austin Brandt of The Midwest Marketer; Mike Sorensen of Livestock Plus; and Jason Lekin from Tama Livestock Auction.

Donations can still be made at www.donorbox.org/gcss and additional photos can be found at facebook.com/iowagcss/.