Home / Iowa / Governor’s Charity Steer Show breaks records
A new user experience is coming! We'll be asking you to login to your Morning Ag Clips account March 1st to access these new features.
We can't wait to share them with you! Read more here. 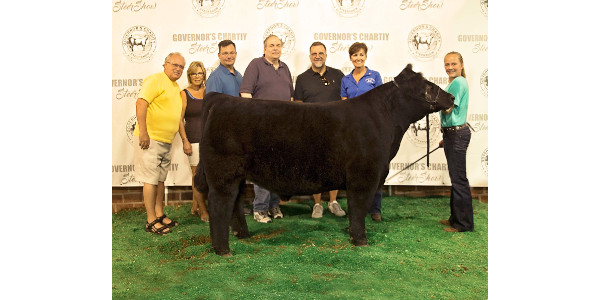 DES MOINES, Iowa — Records were broken at the 36th annual Governor’s Charity Steer Show, which raised over $294,000 for the Ronald McDonald House Charities of Iowa. This year’s event featured the highest selling auction. The money raised benefits the Ronald McDonald Houses of Des Moines, Iowa City, and Sioux City. All of the houses are located near hospitals and provide a “home away from home” for families of seriously ill children. The Iowa Beef Industry Council and the Iowa Cattlemen’s Association sponsor the annual steer show and auction, which was hosted by Governor Kim Reynolds on August 11, 2018 in the Pioneer Livestock Pavilion at the Iowa State Fair.

Since its inception in 1983, the Governor’s Charity Steer Show has raised over $3.5 million for the Ronald McDonald Houses of Iowa. This year’s event included 25 steers, the Iowa youth that raised them, and celebrity show persons, including Governor Kim Reynolds, who competed for the title of“Judge’s Choice.”The official steer show judge for this year’s show was Chuck McCullough from Allerton, Iowa. The judge selected the steer “Chip,” shown by Jim Field, President, Ag and Turf, John Deere, for “Judges Choice,” overall grand champion honors. The Iowa County Beef Supporters sponsored the steer and Freddy’s Steakburgers of Iowa – Maurice Sinclair purchased the steer for $29,000. Additional support was added In Memory of Pat Donohoe by his Friends, Family and John Deere for $36,000. The market value of the steer was also donated to the Ronald McDonald House Charities of Iowa which brought the total to $66,504; this sale set a show record for the highest selling individual steer. Emma Sinclair of Williamsburg, Iowa raised the steer.

The steer shown by Tate Manahl of Tate’s Army was selected by the crowd for the title of “People’s Choice.” The steer was sponsored and purchased by the Foster and Evelyn Barkema Charitable Trust& Franklin County Supporters for $27,300. Steer owner was Kaylie Lundt of Rockwell, Iowa.

Emcees for the show were farm broadcasters Bob Quinn and Andy Peterson, WHO Radio, and Michelle Rook, WNAX Radio. A special guest appearance from Ronald McDonald kept the show lively.The auctioneers were Phil Schooley from Bloomfield, Will Epperly from Dunlap, and Jared Miller from Leon. Assisting the auctioneers catch bids in the ring are Chad Claussen of The Midwest Marketer; Mike Sorensen and Austin Brandt of Livestock Plus; and Jason Lekin from Tama Livestock Auction.