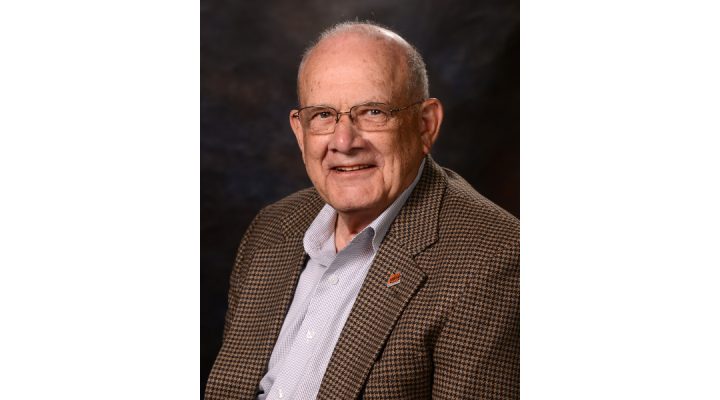 Virgil Jurgensmeyer will be honored with the Governor’s Outstanding Achievement in Agriculture Award during ceremonies March 29 in the Oklahoma state capitol. (Courtesy Photo)

OKLAHOMA CITY — The Governor’s Agriculture Awards will be presented during a special ceremony hosted by the Oklahoma Department of Agriculture, Food and Forestry at 2 p.m. March 29 in Senate Assembly Room 535 in the state capitol. The public is invited to attend.

Virgil Jurgensmeyer will be honored with the Governor’s Outstanding Achievement in Agriculture Award.

In the late 1970s, Jurgensmeyer decided to leave his plant manager job in the Mushroom Division of Ralston Purina Corp. to start his own mushroom business. He needed a location with water, natural gas, access to wheat straw, labor and major highways for transportation. The answer was the northeastern Oklahoma community of Miami. The company, now known as J-M Farms, Inc., was founded in 1979 and the first mushrooms were picked on March 13, 1980 and the initial delivery was made the following day to Associated Wholesale Grocers of Springﬁeld, Mo.  At the onset, there were 40 employees and about 40,000 pounds of mushroom production per week.

Today, the company, overall, employs hundreds of Oklahomans and produces more than 27 million pounds of white button, Crimini and Portabella mushrooms annually. At Miami, they grow, harvest, pack and ship mushrooms daily with an annual sales revenue of more than $40 million. Their trucks deliver products to several states. J-M Farms also services the Department of Defense with fresh mushroom products, is an integrated part of Sysco and AWG food distribution systems and is a supplier to Walmart stores.

Jurgensmeyer has been called “a visionary leader and a natural mentor to Oklahoma’s agricultural community, as well as the local and northeast region of the state.” He has been involved in agricultural organizations and city and state organizations for many years. Jurgensmeyer served as a board member of the Miami Rotary Club from 1980 to 1996. During his service in 1988, the Miami Rotary Club awarded Jurgensmeyer the Paul Harris Fellow Award. He has also served as a member and secretary of the Miami (Oklahoma) Chamber of Commerce from 1981 to 1987. From 1988 to 1996, Jurgensmeyer served as a board member for the Miami Area Economic Development Board.

The former educator was involved in several local and state educational boards and foundations. He was involved in the Miami Public School Enrichment Foundation as vice chairman from 1988 to 1991. He participated on the Northeastern Oklahoma State College Advisory Board from 2000 to 2013 as a board member.

Jurgensmeyer served as the chairman and board member of the Miami Area Zoning & Planning Commission from 1988 to 2009. Too, he served on the Task Force for the Tar Creek Superfund Site from 2003 to 2008. He currently serves on the Lead-Impacted Communities Relocation Trust Board and has been active serving since 2009.

In agriculture, Jurgensmeyer served on the State Board of Agriculture from 1988 to 2003. He is currently an active member of several advisory boards and associations. These include the Oklahoma Cattlemen’s Association with service from 1985, Oklahoma State University Dean’s Advisory Board with service beginning in 1998 and the Robert M. Kerr Food & Agricultural Products Center’s Industry Advisory Committee with service beginning in1996. In 2012, Jurgensmeyer was awarded the DASNR Champion Award from Oklahoma State University’s Division of Agricultural Sciences and Natural Resources for his service to the university. Nationally, Jurgensmeyer has been active in the Mushroom Growers Association – holding the positions of member, secretary-treasurer and president – and the Mushroom Council where he has been a member and board member.

A wheat field, a hog pen, a corner office, the floor of the State House of Representatives, an international food trade market — these are all places that Anna Belle Wiedemann would feel comfortable in. A more diverse agriculturalist would be hard to find.

The first agricultural operation she ran with her husband, Carl, had no running water and no indoor bathroom. Today, the Slash C Ranch encompasses just under 2,000 acres that sprawl through Kingfisher and Canadian Counties. Laying hens, hogs, cattle and wheat have all contributed to the success of the ranch, but production agriculture is just the beginning of Wiedemann’s service to the agriculture industry.

After forming and then serving as president of the first Democratic Women’s Club in her county, Wiedemann was elected to the Oklahoma State House of Representatives in 1968 where she focused on agricultural issues as well as the good of all Oklahomans. She also served as the liaison between the agriculture committee and the Oklahoma Department of Agriculture. After her stint in the House, she went to work for the Oklahoma Consumer Credit Commission and then served as the Interim County Commissioner for Canadian County.

In 1984, Wiedemann took on the role of Coordinator of International Marketing for the Oklahoma Department of Agriculture, Food and Forestry. With this position she traveled extensively promoting the state’s agricultural products in markets across the world. She became the director of ODAFF’s Market Development Division promoting state-branded and educational programs. In addition, she was instrumental in the growth of farmers markets in the state and heavily promoted the use of local products by restaurants. Her next ODAFF position was Director of Rural Development where she designed and implemented programs that helped improve the rural economy of the state.

Through her long-term involvement with the Oklahoma CattleWomen, Wiedemann has been a valuable asset to the beef industry. She is a faithful supporter of 4-H and FFA programs and has served on many agriculture-related boards and committees where she worked tirelessly to improve the industry in her county, state, nation and world. She is an outstanding leader and public servant for agriculture.

Hal Clark will receive the Governor’s Agriculture Environmental Stewardship Award. For more than half a century, he has managed the Clark Ranch in far northwestern Cimarron County. Conserving the soil has been a priority that sustains this productive ranch. His pasture and rangeland management includes rotational grazing, establishing permanent vegetation and controlling erosion to protect both land and water.

Clark’s education in range management coupled with his family’s history with the Dust Bowl led him to become a member of the Cimarron County Conservation District board of directors in 1966. Since that time, he has dedicated over 47 years to advancing soil stewardship. He helped develop the High Plains Five States Range Camp on his ranch to teach high school students the value of taking care of the land and hundreds of students from Colorado, Texas, New Mexico, Kansas and Oklahoma have participated.

As a member of the Oklahoma Conservation Commission from 1978-1996, Clark and his fellow commissioners established the Blue Thumb project to provide statewide education on stream water health. He also served on Gov. Keating’s Animal Waste and Water Quality Task Force which authorized a cost-share program to help landowners install conservation practices that improved water quality and limited soil erosion. He helped the conservation district secure no-till drills and low-energy precision application nozzles for irrigation systems to change the way farming is done in the Panhandle.

“In his 84 years, I imagine Hal has tackled just about every challenge that land has to throw at him,” said State Conservationist Gary O’Neill. He points out that Clark continues to get up to check the cows and fences with a smile on his face.

The Governor’s Outstanding Legacy in Agriculture Award will be presented posthumously to Floyd King of Hydro. He was born in 1918 in “Blackjack Country” in the sandy hills of Caddo County and grew up on a farm homesteaded in 1904. While he farmed and took correspondence classes from Hills Business College in Oklahoma City, he volunteered for one year of service in the U.S. Army just nine months prior to the attack on Pearl Harbor. During his service he saved money and he and his wife, Lola, were able to purchase a small farm north of Eakly in 1945.

King worked tirelessly to persuade the Farmers Home Administration to loan him money to drill a well so he could irrigate his farm. After six years of effort, he drilled the first irrigation well in Caddo County in 1951. This revolutionary act was so successful he eventually farmed over 1,100 acres and rented an additional 600 acres. His experience with irrigation led to opening King’s Irrigation Service in 1954 which was later expanded to include agricultural machinery.

After his death in 2013 at the age of 95, his legacy in the Oklahoma peanut industry endures with other advancements in agricultural irrigation science and techniques. The economy of Caddo County benefited from his vision and his determination.

“In all of his public affairs Mr. King was a hard-working, engaging figure of gracious honesty and abiding dignity,” said Congressman Frank Lucas. “I never had to doubt where my friend, Mr. King, stood when matters of conflict arose – it was always, relentlessly, faithfully on the side of the families that produce our country’s food supply and that carry forth the heritage of American agriculture.”