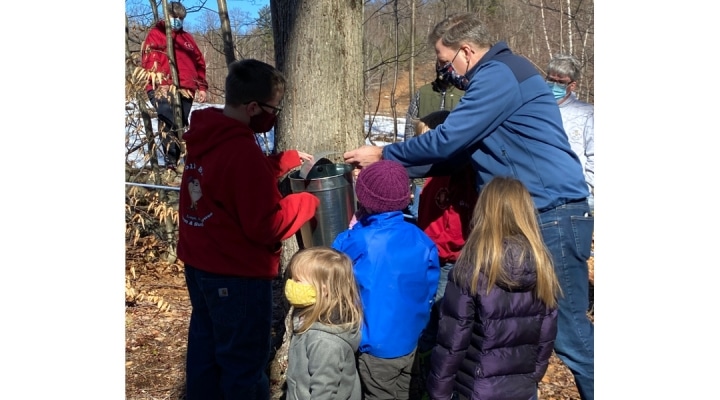 The governor shared his appreciation for the maple business by saying that he is a small sugar maker himself. He has two large, old maple trees that he taps at his home in Newfield, NH. He even boils the syrup on his kitchen stove (much to the chagrin of his wife). He also talked about how maple syrup making signals the changing of the season. “In New Hampshire, sugaring is a sure sign that winter is done…,” said Sununu. It reflects not just the renewal of the land that occurs in spring, but also the sense of renewal that many people feel coming out of the cold winter season. However, Governor Sununu stated that there is an added sense of renewal because of the ongoing pandemic. The sap flowing and life emerging from the melting snow is symbolic of the state and country’s emergence from COVID-19. He encouraged New Hampshire residents to keep looking forward and to think big saying, “It’s going to be a big summer here in the Granite State!”

Vice President of the NH Maple Producers Association, Dave Kemp, also spoke. On behalf of the NH Maple Producers Association and all maple producers of NH Mr. Kemp welcomed the governor and others stating, “Welcome to Temple and the start of maple sugaring season. A special thank you for providing the state with protective guidelines that will allow us to make, share, and enjoy nature’s sweet bounty while keeping us safe from COVID-19.”

The 150 attendees of the event were treated to a beautiful and bright late winter day in Temple. Some of the attendees were local sugar makers who made the trek to Temple to support the event.

Connelly Brothers Dairy has been in operation since the 1980s. Current owners Chris and Mike Connelly have been running the farm since the mid-1990s. Since then, the farm has diversified to include ice cream making and sugar making. They are also a registered tree farm and are active in conserving their farm acres.