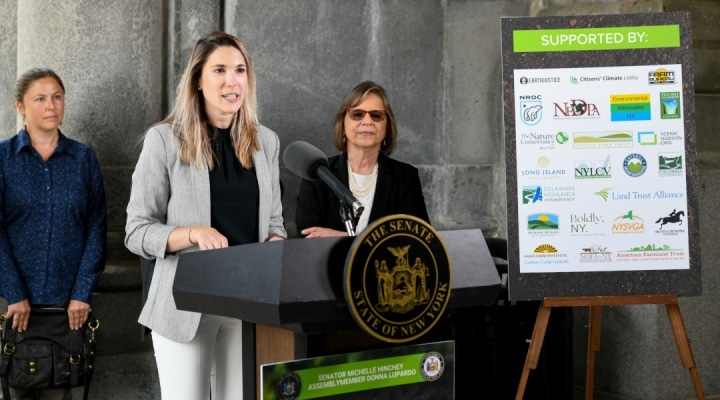 Worldwide, agriculture accounts for 23% of greenhouse gas emissions, and cropping systems account for between eight and 12%. The National Academy of Sciences estimates that agricultural soils could sequester 276 million tons of atmospheric carbon dioxide annually, which would offset 5 percent of U.S. emissions — a key tool to slowing global climate change, preserving a livable planet, and ensuring food security into the future.

“The Soil Health and Climate Resiliency Act is the first major piece of legislation in New York that paves the way for farmers, who are already leading on environmental management, to become a cornerstone of our fight against the climate crisis,” said Senator Michelle Hinchey. “We can no longer afford to be just carbon neutral; we have to be carbon negative. The signing of this legislation by Governor Hochul puts New York agriculture front and center in the fight to remove carbon from the atmosphere and make our state a national leader in climate mitigation. I thank the Governor for her support, my Assembly counterpart Donna Lupardo, and the bipartisan group of agricultural and environmental organizations that are committed to driving holistic climate change solutions forward.”

Assemblymember Donna Lupardo said, “The Soil Health and Climate Resiliency Act recognizes the vital role agriculture can play in helping the state achieve its climate goals. It starts off with the simple premise that the health and resiliency of NY’s agricultural soil is an important priority. Healthy soil produces healthier foods, mitigates climate change through carbon sequestration, and protects our natural resources. Sometimes referred to as regenerative agriculture, this bill is a major step toward encouraging a “culture of soil health” in NYS. I’d like to thank Senate Hinchey for her leadership on this issue, and Governor Hochul for recognizing the importance of nurturing and protecting NY soil. I’d also like to recognize the many advocates who came together in support of this legislation; their hard work and dedication is deeply appreciated.”

The Soil Health and Climate Resiliency Act achieves the following:

During the 2021 state legislative session, agriculture chairs Hinchey and Lupardo built wide-ranging support for the Soil Health and Climate Resiliency Act, leading to its unanimous passage in both houses of the legislature and popular endorsement from agricultural and environmental organizations.

Erica Goodman, New York Regional Director for American Farmland Trust, said, “American Farmland Trust, as part of an engaged group of agricultural and environmental organizations, applauds the passage of the Soil Health and Climate Resiliency Act. We commend Assemblywoman Lupardo and Senator Hinchey for their work in sponsoring this bill and ushering it to unanimous passage by the legislature and thank Governor Kathy Hochul for signing it into law today. This new law provides important support for farmers in adopting soil health practices that improve water quality, promote resilience to extreme weather events, and increase carbon sequestered in soils to help New York state meet its climate goals while creating a more viable future for agriculture.”

Conor Bambrick, Climate Director of Environmental Advocates NY, said, “A warming climate threatens us in ways we may not expect. The Soil Health and Climate Resiliency Act is the forward thinking policy we need to support farmers while protecting New York’s agricultural soils. This legislation supports a healthy and affordable food supply, protects our natural resources and mitigates climate change.  We commend Governor Hochul for signing this bill into law and Senator Hinchey and Assembly Member Lupardo for their work on this important issue.”

Elizabeth Wolters, New York Farm Bureau Deputy Public Policy Director, said “New York farmers have made great strides in improving soil health and fighting climate change, and today’s action by the Governor, signing the Soil Health and Climate Resiliency Act will build on that success. This legislation will assist farmers with implementing best management practices that will store more carbon in the soil, reduce runoff, and improve farm productivity by making our farms more resilient to the impacts of extreme weather. New York Farm Bureau thanks Governor Hochul and the Agriculture Committee Chairs, Sen. Hinchey and Assembly Member Lupardo, for their leadership and support for this important bill.”

Andy Bicking, Director of Government Relations and Public Policy for Scenic Hudson said, “Conserving soil resources has always been a hallmark of caring for the environment and good farming. The Soil Health and Climate Resiliency Act recognizes this and takes the visionary step of defining healthy soils and promoting the practices that create them. These goals are essential to address climate change and secure the economic viability of agriculture. As we have heard from the Climate Action Council’s Agricultural and Forestry Advisory Panel, many of these regenerative strategies have been practiced for generations by organic and BIPOC farmers. Governor Hochul’s leadership will bring together the many stakeholders who are engaged in this issue and create voluntary soil health standards that will guide on-the-ground decisions across New York State. I look forward to working with her administration and the Legislature to identify actions that build on the new law and enhance the climate-resilience of the state’s agriculture. Scenic Hudson offers its congratulations to the governor, Agriculture Commissioner Richard Ball, Assembly members Donna Lupardo and Didi Barrett, and Senator Michelle Hinchey, without whom this important achievement would not have been possible.”

Supporters of the Soil Health and Climate Resiliency Act Include:

–The Offices of Senator Michelle Hinchey and Assemblymember Donna Lupardo