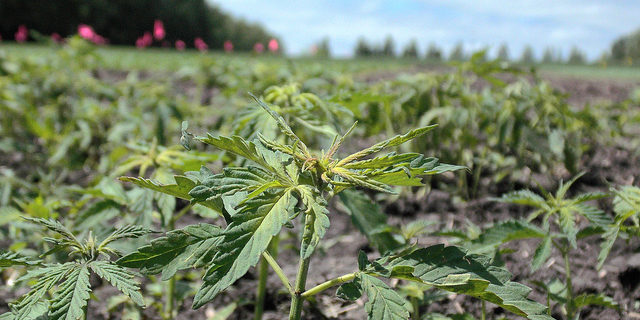 Iowa farmers will have the option of growing industrial hemp next year under a law signed by Gov. Kim Reynolds on Monday. (Lesley L. via Flickr)

DES MOINES, Iowa (AP) — Iowa farmers will have the option of growing industrial hemp next year under a law signed by Gov. Kim Reynolds on Monday.

The Iowa Hemp Act passed the Legislature with overwhelming support last month with just one no vote in the Senate and three in the House.

The bill allows licensed growers to cultivate the crop on up to 40 acres (161874.4 sq. meters) but before that can begin the Iowa Department of Agriculture and Land Stewardship must develop a plan and submit it for approval of the U.S. Department of Agriculture. The USDA must still release its own regulations this fall and hopes to have things in place for farmers to begin hemp growing during the 2020 planting season.

“We’re excited for growers in Iowa to have the same opportunities to compete as their peers in other states,” Iowa Secretary of Agriculture Mike Naig said in a statement. “We’ve collaborated with other state agencies as well as law enforcement officials to prepare for the deregulation of hemp in Iowa. We advise growers to do their research to be sure there is a viable, profitable market for commercial hemp before they make the investment.”

Industrial hemp can be used in food, fiber, paper, beauty products and other products and the industry estimates it could grow nationally to be a $1.9 billion market by 2022.

“It’s an exciting time to be riding this watershed moment in the agriculture community,” said Dr. Christopher Disbro, a medical doctor who founded the Iowa Hemp Association, a nonprofit organization working to reintroduce hemp as an agricultural crop.

He said those who may benefit most from a rapidly expanding hemp market are rural communities and family farmers who incorporate it into their soybean and corn rotations as a third crop.

He said it’s difficult to estimate how many farmers will decide to grow hemp.

“If it’s any indicator my phone has not stopped ringing since it cleared the House this year,” he said. “Farmers all over the state want to get involved in varying degrees. Some want to process, some want to get into small organic production, others want the larger fiber crops.”

“It’s very crucial to farmers to tell them that its great you’re excited about a new opportunity but you need to figure out what you’re growing it for, where the market is and the best piece of advice is to get a signed contract that guarantees you the payment,” she said.

Rieck-Hinz said research must go into how to cultivate hemp, how it will fit into a rotation of crops and how to harvest it. She said she’s learning from neighboring states. Minnesota is in the third year of a pilot program and Wisconsin just completed the first year.

The National Hemp Association Executive Director Erica Stark said most states have either passed legislation to legalize hemp growing or have limited commercial production or research plots operating under a 2014 Farm Bill program.

Among those not planning hemp production is South Dakota where Gov. Kristi Noem last month vetoed a bill saying it would make law enforcement’s job more difficult and could be a first step to eventually legalizing recreational marijuana and Idaho where lawmakers couldn’t agree on legislation this year.