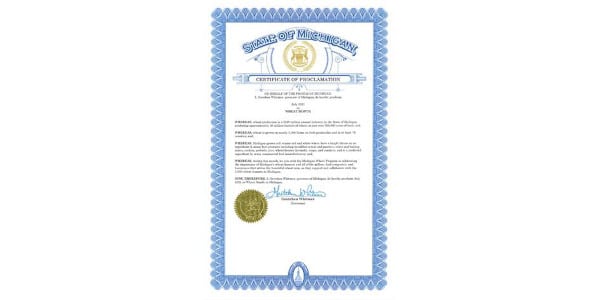 LANSING — As Michigan wheat growers harvest their amber waves of grain, Governor Gretchen Whitmer has proclaimed July 2021 as Wheat Month in Michigan. Whitmer’s Certificate of Proclamation recognizes the importance of “Michigan’s wheat farmers and all of the millers, food companies and businesses that utilize the bountiful wheat crop … and collaborate with the 5,000 wheat farmers in Michigan.”

America the Beautiful, first set to music in 1910, memorializes the country’s bountiful wheat harvest in its opening verse. Alas, the author Katharine Lee Bates was inspired by wheat fields in Colorado, although today Michigan’s harvest is more bountiful than anything Bates saw.

The official proclamation from Gov. Whitmer notes that 40 million bushels of wheat are grown on just over 500,000 acres of farmland on both the Upper and Lower Peninsulas, and in at least 78 counties.  The proclamation notes that “Michigan-grown soft winter red and white wheat have a bright future as an ingredient in many food products including breakfast cereal and pastries, cakes and baking mixes, cookies, pretzels, pies, wheat berries (kernels), soups and crackers, and is a preferred ingredient by many commercial food manufacturers.”

The proclamation further notes that wheat is a $249 million crop in Michigan, annually.

“At this patriotic time of year, we appreciate the Governor’s proclamation as a fitting tribute to this very important staple in the American diet and to the Michigan wheat farmer who has out-produced the national average for many years running,” said Jeff Krohn, chairman of the Michigan Wheat Program and wheat farmer in Owendale.

Michigan wheat farmers annually harvest wheat, using a combine to harvest wheat kernels to be milled into flour for a variety of tasty wheat products for consumers. Many also harvest the stalks which are used for straw for animal bedding and other uses.

The MWP is a check-off organization funded by the state’s wheat farmers who grow wheat in 78 of Michigan’s 83 counties.  The Michigan Wheat Program promotes the state’s wheat industry by funding and supporting the strategic priorities of wheat farmers by working with input suppliers, seed producers, millers, end users and consumers.  Research and grower education are top priorities for the organization.  For more information visit miwheat.org.