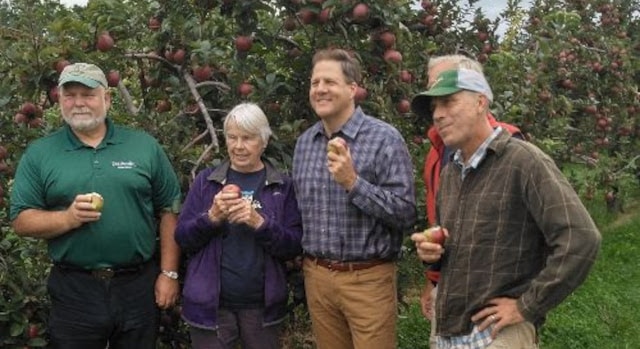 The Hampshire apple is a firm, crisp, and juicy Mac-like apple with a sweet-tart taste that is good for both cooking and eating. The variety came from a 1990 chance seedling that was discovered amongst a row of Macintosh trees at Gould Hill Orchards in Hopkinton, NH.

New Hampshire Fruit Growers Association (NHFGA) president Kitt Plummer said of the event, “We were pleased to have Governor Sununu and Commissioner Jasper come out to perform the first ceremonial apple pick of the 2021 apple season.”

The season has been in full swing for a few weeks and goes into early November. “Don’t worry,” said Plummer. “If you don’t get to pick all the apples you want, they are stored, sold, and packed for sale throughout the year!”

To find an orchard near you check out the NH Fruit Growers Association website at https://www.nhfruitgrowers.org/.