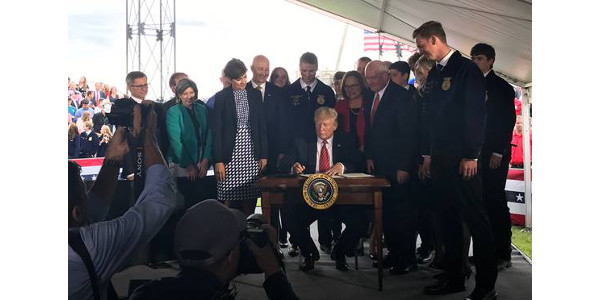 President Trump signs an executive order during an event in Council Bluffs celebrating his recent approval of year-round E15. (Courtesy of Office of Governor Pete Ricketts)

BELLEVUE, Neb. — Governor Pete Ricketts welcomed President Donald J. Trump to the Midwest as Air Force One landed at Offutt Air Force Base in Bellevue, Nebraska. The Governor then joined President Trump at an event in Council Bluffs, Iowa to celebrate the President’s approval of year-round E15.

“From cutting red tape to new trade deals like USMCA, President Trump has been delivering on his promises for America’s Heartland,” said Governor Ricketts. “The President’s successful work on E15 is an especially big win for Nebraska’s farmers. It was an honor to welcome the President, and Nebraskans greatly appreciate the work he has been doing on our behalf in Washington, D.C.”

Previously, E15 could be marketed September 16th through April 30th. A new rule recently finalized by the Environmental Protection Agency now allows E15 to be sold all year long. Nebraska is the second-largest ethanol producing state in the nation behind Iowa.