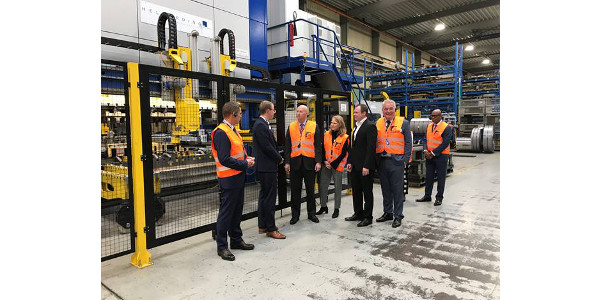 LOENINGEN, GERMANY – Today, Governor Pete Ricketts visited the international headquarters of Graepel during his trade mission to Germany.  Graepel, a manufacturer of perforated metals, has its North American headquarters in Omaha, Nebraska.

During the visit, Governor Ricketts met with the company’s executive leadership to thank them for their continued investment in Nebraska and toured their facility.  Graepel employs 40 Nebraskans and has a total workforce of 750 worldwide.  Their facility in Nebraska produces perforated and formed metal products for the agricultural machinery, construction equipment, heavy duty truck, and rail industry.

Nebraska companies exported almost $179.4 million of goods to Germany in 2018.  Exports to Germany have increased by 26% since 2010 ($142.1 million).  Over the last five years, Germany has been Nebraska’s 10th largest trading partner.