Home / Nebraska / Gov. Ricketts celebrates merger of two agencies
A new user experience is coming! We'll be asking you to login to your Morning Ag Clips account March 1st to access these new features.
We can't wait to share them with you! Read more here. 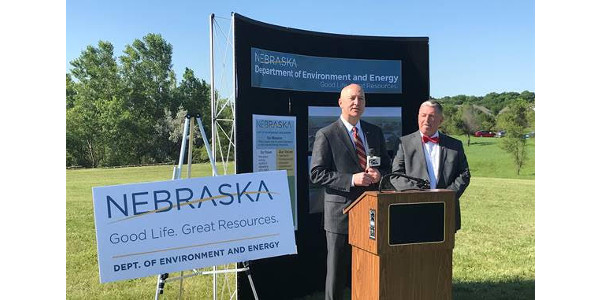 Following the passage of LB 302, the two agencies are merging into the new Department of Environment and Energy (DEE) effective July 1, 2019.

“This merger will make state government services more efficient, effective, and customer-focused,” said Governor Ricketts. “The two agencies have a number of related functions and similar goals, and their services to Nebraskans will be enhanced by combining their efforts. The newly consolidated agency will be able to take a longer-term, more strategic approach to helping grow Nebraska as we work to be a good steward of our natural resources and promote energy efficiency.”

Jim Macy has served as the Director of the Nebraska Department of Environmental Quality for the past four years, and he has led the Nebraska Energy Office for several months as Acting Director.

“The two agencies have many common purposes, and we expect to see many positive benefits by combining and unifying our efforts,” Macy said. “Merging the two agencies will create greater depth in staffing and minimize duplication of jobs. It also improves the delivery of environmental and energy programs and policies statewide.”

The event was held at a construction site in the Fallbrook area of Lincoln, which will be the new location for the DEE in about a year. Macy said the new site will house all of DEE’s employees in one location and will also have room for future expansion. He said the move will also provide cost savings compared to having staff and equipment in multiple locations.

Watch video from the press conference by clicking here.