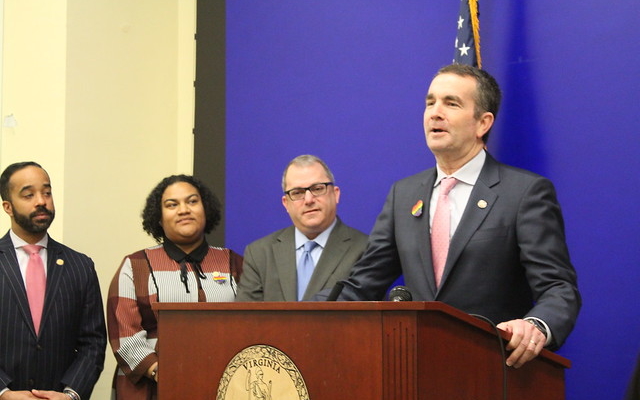 RICHMOND, Va. — Governor Ralph Northam today announced that Legacy Cider will invest $300,000 to establish a new hard cider production facility in Bedford County. Located on-site with the owners’ craft brewery Apocalypse Ale Works, the addition will also include improvements to the existing taproom and biergarten. Over the next three years, Legacy Cider will create five new jobs and purchase $146,000, or 12,150 bushels, of Virginia-grown apples, 100 percent of anticipated agricultural purchases.

“Legacy Cider’s new operation in Bedford County will further strengthen Virginia’s position as a top pick for artisanal ciders,” said Governor Northam. “This investment from Legacy Cider and their commitment to using 100 percent Virginia apples supports the Commonwealth’s farmers, who are at the core of our thriving craft beverage industry, and highlights the growing connection between agriculture and tourism inVirginia.”

In 2013, the John family opened Apocalypse Ale Works in Forest, and it became the first craft beverage attraction in Bedford County. Building on their success, the owners recently planted apple trees and acquired a Virginia Farm Winery license to establish Legacy Cider, which will produce a variety of traditional and innovative ciders made with 100 percent Virginia apples.

“This exciting announcement highlights continued success in Virginia’s craft beverage industry and the growing connection between agriculture and tourism,” said Secretary of Agriculture and Forestry Bettina Ring. “I am pleased that the Commonwealth could partner with Legacy Cider and the locality through the AFID program to support the first award in Bedford County.”

“We are incredibly excited to announce our plans to open Bedford County’s first craft cidery,” said the John family, owners of Legacy Cider and Apocalypse Ale Works. “Legacy Cider will be a hard cidery attached to Apocalypse Ale Works’ existing production facility and tasting room. The heart of Virginia has some of the most talented farmers and fertile farmland in the world, so we could not be more excited to take full advantage of this opportunity and produce world-class cider featuring exclusively Virginian apples.”

The Commonwealth is partnering with Bedford County and Legacy Cider on this project through the Governor’s Agriculture and Forestry Industries Development (AFID) Fund, which is administered by the Virginia Department of Agriculture and Consumer Services (VDACS). Governor Northam approved a $12,000 grant from the AFID Fund to secure the project for Virginia, which Bedford County will match with local funds.

“We have such a rich history of orchard production in Bedford County and it’s exciting that Legacy Cider is building on that tradition by sourcing produce from local and regional orchards,” said Chairman of the Bedford County Economic Development Authority Mickey Johnson. “This project makes a significant economic and tourism impact and also promotes a promising local agribusiness network.”

“By choosing to expand its existing facility after six successful years in Forest, Apocalypse Ale Works reaffirms that Bedford County is a great place to open, build, and grow a prosperous business,” said Delegate Kathy J. Byron. “Legacy Cider is an expansion that not only will create jobs, but also will use Virginia apples in producing a quality product. Clearly, the John family is committed to Virginia.”

“Congratulations to Legacy Cider on the exciting plans to open Bedford County’s first craft cidery,” said Senator Steve Newman. “We are delighted that over the next three years, five new jobs will be created and $146,000, of Virginia-grown apples, will be purchased. We wish them much continued success and we congratulate Bedford County, Legacy Cider, and our local government team who have worked hard to makeVirginia thrive.”

I picked apples with a crew of migrant farm workers
October 14, 2020