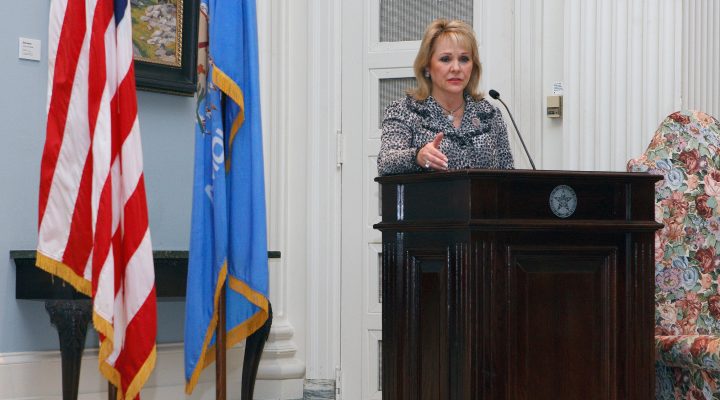 OKLAHOMA CITY — Governor Mary Fallin has signed a joint letter with the governors of Texas, Kansas and New Mexico requesting the acting Secretary of Agriculture Mike Young of the United States Department of Agriculture to temporarily suspend grazing restrictions in the Conservation Reserve Program (CRP).

Due to the wildfires burning more than 1.5 million acres across the four states, livestock producers are experiencing extreme grazing land shortages. Daily operations of farmers and ranchers have been forced to cease as they work to move livestock to a safe grazing area away from the wildfires.

If the emergency grazing authorization is approved by Secretary Young, livestock producers affected by the wildfires would be provided access to more land for their livestock to graze on. CRP is a voluntary land conservation program administer by Farm Service Agency (FSA) of USDA to help agricultural producers safeguard environmentally sensitive land.

According to FSA, emergency grazing of CRP designated land is authorized under certain conditions to provide relief to livestock producers due to certain natural disasters.

The letter was sent to Secretary Young this afternoon and stated “These fires have also devastated critical infrastructure, including fencing, on farms and ranches in our states. The Emergency Conservation Program provides critical financial resources to affected farmers and ranchers to rebuild fences. We urge the Farm Service Agency to expedite the implementation of the Emergency Conservation Program in our states pursuant to Title 7, part 701 of the Code of Federal Regulations. The sooner the program is implemented, the faster the livestock industries in our states can begin to rebuild from this devastating event.”

Forecast remains cloudy for the cotton market this year
July 15, 2020