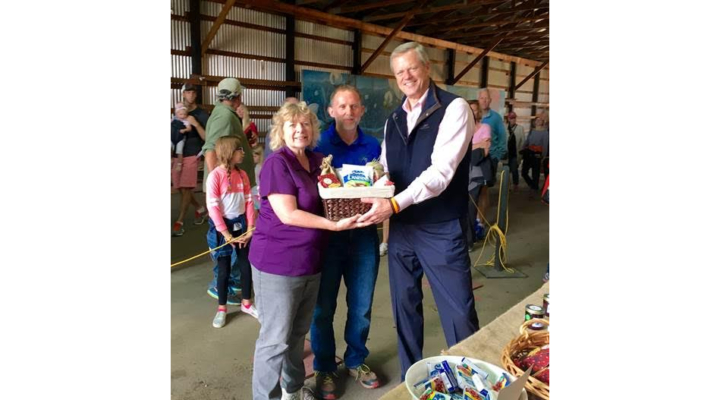 “The Cranberry Harvest Celebration provides an excellent opportunity to learn about the Commonwealth’s official berry and this important and valuable part of our state’s economy and culture,” said Governor Baker. “We encourage all residents to buy local and support their Massachusetts’ cranberry growers this season.” (Courtesy Photo)

WAREHAM, Mass. — On Oct. 7th, Governor Charlie Baker visited the Cranberry Harvest Celebration in Wareham to recognize Massachusetts’ cranberry growers and the beginning of cranberry harvest season. At the event, he watched the water harvesting of cranberries and spoke with growers from the second largest agricultural sector in the state. Massachusetts ranks second nationally in cranberry production.

“The Cranberry Harvest Celebration provides an excellent opportunity to learn about the Commonwealth’s official berry and this important and valuable part of our state’s economy and culture,” said Governor Baker. “We encourage all residents to buy local and support their Massachusetts’ cranberry growers this season.”

Last year’s harvest produced 220 million pounds of cranberries in Massachusetts, and this year is expected to be similar. Massachusetts cranberries have an annual market value of $102 million, making up 20% of the state’s agricultural output.

“October is the perfect time to recognize the hard work being done by cranberry growers to produce high-quality cranberries for Massachusetts residents,” said Energy and Environmental Affairs Secretary Matthew Beaton. “The Baker-Polito Administration looks forward to continuing to support current cranberry growers and the next generation of growers of this historical and nutritious berry.”

“Cranberry production has been an integral part of Massachusetts’ agricultural heritage since the early 1800’s,” said Massachusetts Department of Agricultural Resources MDAR Commissioner John Lebeaux. “There are many opportunities in October to learn more about cranberry production in Massachusetts; whether it’s through bog tours where you can put on waders and get right into the bog or culinary events showcasing cranberries’ versatility in the kitchen.”

There are approximately 400 growers in the state, 70% of which are small family farms with less than 20 acres of bog. Many cranberry growers are turning to renewable forms of energy and installing more energy efficient equipment on their farms through grant programs from MDAR. Grant programs such as the Agricultural Environmental Enhancement Program (AEEP) have made it possible for some growers to install auto-irrigation controls to automate water pumping and water use, saving gallons of water and energy use.

“I was delighted to welcome Governor Baker to my home town of Wareham and see first-hand the passion and hard work of those involved in the business of growing cranberries,” said State Representative Susan Gifford (R-Wareham). “Our growers face increasing challenges both on the national and international levels, and I know they appreciate the interest of the Governor in their efforts to compete with these challenges.”

“The cranberry industry is a crucial part of the Commonwealth’s economy and has been for more than 200 years,” said Senate President Pro Tempore Marc R. Pacheco (D-Taunton). “Southeastern Massachusetts cranberry growers are integral for the Commonwealth’s agricultural industry, and as a result of their hard work, we look forward to another bountiful harvest.”

“As a Massachusetts cranberry grower, we’re limited on the amount of available resources such as water and land,” said Patrick Rhodes of Cape Cod Select. “For that reason it is incredibly important to be an efficient grower. At Edgewood Bogs we were an early adopter of technologies like automated irrigation, solar power, and hybrid crops which collectively have helped us to be more competitive in today’s market.”

“The cranberry industry is a critical component of our local economy and environment, providing jobs, tourism opportunities, open space, wildlife habitat, water resource management and more,” said Brian Wick, Executive Director of the Cape Cod Cranberry Growers’ Association (CCCGA). “As we move into the 201st year of commercial cranberry production in Massachusetts, our growers continue to find ways to innovate their farming activities while simultaneously  increasing their environmental commitment, creating a sustainable and viable legacy for future generations.”

To learn more about cranberry events and cranberry bogs open to the public, visit the Mass Grown and Fresher interactive online map.