Home / Washington / ‘Gorgeous’ 2021 crop of WSU’s Cosmic Crisp® apples will hit stores early
A new user experience is coming! We'll be asking you to login to your Morning Ag Clips account March 1st to access these new features.
We can't wait to share them with you! Read more here. 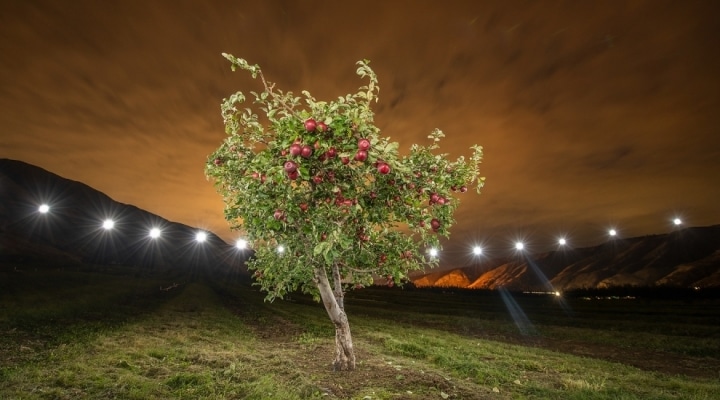 The official release date for the apple, Nov. 8, 2021, is weeks earlier than the first two crops of 2019 and 2020. Set by a quality standards committee of growers, advised by WSU scientists, the official date ensures this new variety hits the market at peak sweetness and crispiness.

“The release date has to do with the best consumer experience for the fruit,” said Carolina Torres, WSU Endowed Chair for Tree Fruit Postharvest Systems. “You want to release when it has the best flavor, texture, and condition.”

Cosmic Crisp® is the brand name for the WA 38 apple variety, originally bred at WSU’s Wenatchee research station in 1997. WSU researchers evaluated WA 38 against other contenders for more than a decade before releasing it to growers in 2017. Nearly 17 million trees have since been planted, and more than 4.5 million 40-pound boxes of Cosmic Crisp® are expected to ship from this year’s crop.

“The success of WA 38 shows what this industry can do with the right variety at the right time,” said Kate Evans, professor and lead apple breeder in WSU’s Department of Horticulture. “It is hugely validating for a plant breeding program to have this type of widespread acceptance of a release.”

A portion of the sale of each box supports scientific discovery at WSU. Most of the university’s apple breeding program, which develops new, improved varieties for Washington growers, is funded by WA 38 royalty distributions, which are officially governed by the WSU Faculty Manual.

Apple trees use photosynthesis to turn carbon dioxide, water, and sunlight into sugar, which is stored in the fruit as starch. As apples ripen, starch is turned back into sugar. Packers and WSU scientists use a starch test to check ripeness.

Setting the 2021 release date, the committee considered data from WSU researchers on starch conversion, as well as estimated harvest dates. Packers will test each lot of apples for starch before packing, and commercialization company inspectors will also visit major warehouses to test for ripeness, color, shape, and appearance.

Cosmic Crisp® is special in part because of how it matures. Orchardists use a measure called a maturity index to tell if fruit is ready for harvest. As it nears maturity, WA 38 apples maintain their crisp texture through harvest and well beyond.

The apple is also “very forgiving” about when it’s picked, Torres said.

“You can harvest across a wide range of dates, earlier or later based on the needs of the orchard,” without the fruit over-ripening, she said. The apple was specially bred for its excellent storability; the fruit maintains flavor and texture for months in cold storage, making for year-round availability.

The third harvest is an important moment for the apple, said Kathryn Grandy, chief marketing officer for Proprietary Variety Management, the university-contracted commercialization company for Cosmic Crisp®. The 2019 launch preceded a pandemic, which raised challenges that still ripple through the economy.

Happily, the 2021 harvest is one of the best in years, reaching a dark, red color early in the season.

“The crop is gorgeous,” Grandy said.

Cosmic Crisp® will be featured in vendor booths, digital displays, and grower interviews at the 2021 Apple Cup, Friday, Nov. 26, at Seattle’s Husky Stadium.

The new apple will be available in most major stores nationwide beginning Nov. 8. Supporting the national shipment, an integrated marketing campaign will serve consumers plentiful ways to incorporate the apple into holiday menus and traditions.