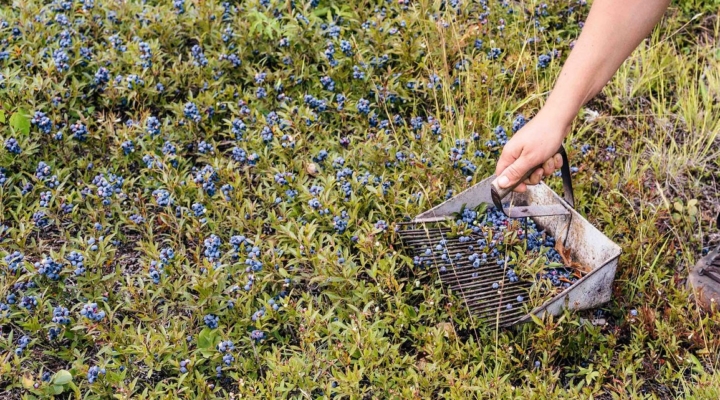 Maine is by far the largest wild blueberry producer in the country. The wild berries are a little smaller than their plump cultivated cousins, and they have a slightly different flavor. Prices to consumers have held fairly steady despite the volatility in the fields. (Allagash Brewing, Flickr/Creative Commons)

PORTLAND, Maine (AP) — Growers in the No. 1 wild-blueberry state suffered another bad year, but agriculture officials say there are reasons to believe Maine’s historic and troubled industry is about to turn a long-awaited corner.

Prices to farmers, which topped out at more than $1 per pound in 2007, also do not appear to have improved too significantly from recent years in which they lagged below historic levels, he said. Prices fell to 25 cents per pound in 2017 and appear to be returning from the bottom, but reached only 30 or 35 cents per pounds in 2018, Yarborough said

But Yarborough and some members of the industry also believe there’s reason for optimism. Excess inventory has held back blueberry prices in recent years, and Yarborough said that is likely to start changing in 2019 because of two straight years of modest harvest sizes.

“I think by the time we harvest next year, we’ll be seeing a drawdown of all that storage,” Yarborough said. “The question is always, what crop are we going to have next year?”

Maine is by far the largest wild blueberry producer in the country. The wild berries are a little smaller than their plump cultivated cousins, and they have a slightly different flavor. Prices to consumers have held fairly steady despite the volatility in the fields.

The harvest fell in 2018 because of troubles with weather, such as freeze, and the fact that harvesters made a little less effort than in previous years, Yarborough said.

Effort on farms declined in 2017 after three straight years of huge crops of over 100 million pounds, which sent prices to farmers tumbling because of excess inventory.

Maine wild blueberries must also compete with those from Atlantic Canada, where the dollar is weaker and the industry is struggling with similar circumstances. Almost all the wild berries are frozen, and they are used extensively in processed foods.

While the harvest was down last year, it was fairly similar to the crop size Maine used to see in the ’90s and 2000s, before larger crops became commonplace in the early 2010s. Homer Woodward, vice president of operations for Wyman’s of Maine, said he’s hopeful prices will start to track up in the coming years as excess inventory starts to dwindle away.

“Hopefully that’s what is happening,” Woodward said. “We had a terrible harvest, and the market didn’t rebound like we normally would expect it to.”