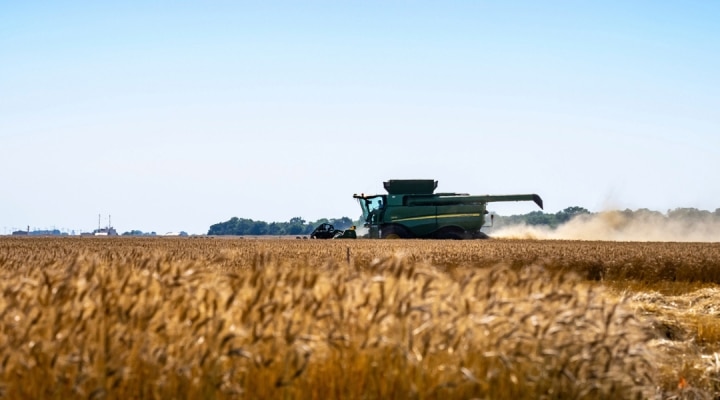 STILLWATER, Okla. — Wheat harvest in Oklahoma appears to be going well as it heads into its final stages, despite a late start in parts of the state because of weather and excessive soil moisture, said Oklahoma State University experts.

“Yields in north-central Oklahoma are exceeding averages by 200% in some instances,” said Trent Milacek, OSU Extension area agricultural economist. “Protein premiums up to 5% of the cash price are available if producers can deliver wheat above 11% protein.”

Yields in southwestern Oklahoma during early cuttings were providing 30-65 bushels per acre. Many test-weights reported have come in at 60 pounds or above. Wheat with a high test-weight typically has more extractable flour and less bran, making it more valuable to bakers and millers.

Land Run Farmer’s Cooperative in Waukomis has reported that wheat quality is highly variable this year. General manager Jeremy Kristek attributed the cause mostly to differences in specific production practices on individual farms. He expects harvest to be completed by about July 27 in the Land Run trade territory as custom cutters arrive from Texas and southern Oklahoma.

Statewide, there is some concern about the presence of sooty mold, which looks like somebody sprinkled charcoal on the wheat heads. Wet and humid conditions during the delayed harvest promoted the fungal growth.

“Producers who are planning to use wheat with sooty mold for seed should treat the seeds before planting,” said Amanda de Oliveira Silva, OSU Extension small grains specialist. “Fungi such as sooty mold can negatively affect germination, resulting in lower seedling emergence.”

The world’s 2021-2022 wheat crop is projected to be a record 29.2 billion bushels. Last year’s world crop was 28.5 billion bushels. The Black Sea area will be producing a record 4.8-billion-bushel crop, with exports expected to increase about 8%.  India also is looking at harvesting a record crop.

“India is wanting to open up its marketing system,” said Kim Anderson, OSU Extension grain marketing specialist. “That probably will not affect wheat prices this year. India is the world’s second- or third-largest producer of wheat, so it will have an effect in future years.”

Wheat prices are still strong, coming in at about $6 per bushel. It was $7.25 per bushel in mid-May, which may have some producers thinking something is wrong. However, the price of wheat was $4 per bushel around this time last year.

The more worrisome issue to OSU Extension experts is the expanding lack of soil moisture in parts of the state, and particularly in wheat-producing areas of Oklahoma. This may affect the ability of farmers to plant summer crops such as milo, soybeans and sesame.

“It becomes a struggle of what to wish for – continued dry weather for good harvest environments or rain for double-crop seeding and improved pasture conditions,” Milacek said.

Beef with a story to it