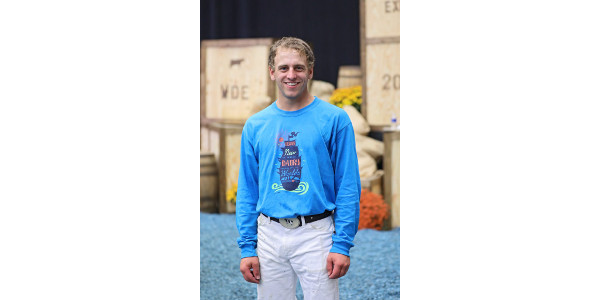 Charlie Hamilton during his shift in the show ring at the 2017 World Dairy Expo. (Photo: Danae Bauer/Farmgirl Photography)

MADISON — Charlie Hamilton admits that he let his schoolwork slide in early October. The University of Wisconsin-Madison senior figured his time would be better spent flipping sandwiches on a grill or cleaning up after cows.

This might sound like senior slump, but it was anything but. He missed a few classes, but he learned a lot, made some money, made great career contacts and had a blast.

The first week of October is when Madison hosts World Dairy Expo, a five-day trade show that draws 75,000 visitors, 800 commercial exhibitors and several thousand world-class dairy cattle. The show happens just a couple miles from campus, and Hamilton and his classmates take full advantage. The UW-Madison’s Badger Dairy Club (of which Hamilton is president) organizes a large workforce for the event and operates one of its most popular food stands.

“I’ve heard the quote, ‘Don’t let grades get in the way of your schooling,’ and I would say that Expo week is the epitome of that,” says Hamilton, a dairy science major. “We not only learn about the dairy industry, but also about managing people and money and handling difficult situations. I would say some of those lessons are as important as anything we can ever learn in class, and there is no other way to learn it.”

Each year, about 100 UW students handle a wide variety of tasks at the dairy show, such as setting up and maintaining the show ring, staffing the milkhouse and cleaning out the barns. World Dairy Expo pays the workers, but the club recruits and schedules them and collects tax forms and time sheets. Students and World Dairy Expo both benefit, says Scott Bentley, the show’s general manager.

“World Dairy Expo could not happen without the annual contributions and labor from the UW-Madison students,” Bentley says. “During a three-week period they work thousands of hours to ensure that Expo runs seamlessly and professionally.”

The club also teams with the UW-Madison chapter of the Collegiate Farm Bureau to run a food stand that sells about 30,000 grilled cheese sandwiches (choices ranged from American and Swiss cheese to specialty varieties like pesto Havarti and smoked gouda) and 12,000 milkshakes. Earnings from the stand pay for some great field trips. Last year, for example, club members spent four days in California visiting dairy farms and processing plants.

Organizing things at World Dairy Expo is a crash course in leadership. The club appoints a general chairperson and co-chair to oversee the whole effort and others are assigned to manage individual work areas and handle business details.

“Being the club’s business chair at Expo allowed me to hone my planning, organizational, and communication skills,” says Marisa Klister, a junior in the UW-Madison’s pre-veterinary program. “My co-chair and I made a schedule of each day detailing when and where student workers needed to be picked up to be shuttled to Expo. We communicated with each other and the other chairs to accommodate changes in the schedule.”

Connor Willems, one of two students in charge of the cheese stand, had to manage both people and groceries.

“We go through roughly 1,300 lbs. of American Cheese and 700 lbs. of Swiss, 650 lbs. of butter and about 2,000 loaves of bread,” says Willems, a dairy science senior. “It requires good critical thinking to make sure we will have enough of everything but not so much that we are being wasteful.”

World Dairy Expo also lets students showcase their management skills in front of a key audience, points out Laura Hernandez, an associate professor of dairy science who is the club’s faculty advisor.

“The students have a microcosm of what it’s like to be in charge of something that’s really important and to be held accountable,“ she says. “When they do a good job of it, all those industry people see how great they are at it. So they get to display their work ethic and also make contacts with people in different parts of the industry, which might lead to a job later on.”

Students also learn to manage their own time. Charlie Hamilton may have let his schoolwork slide a bit during the show, but he didn’t blow it off. He kept up by hitting the books extra hard before and after the event.

“We can’t be at two places at once, so it is important to start preparing well in advance. And after Expo is done, there’s always the task of catching up on school,” he says. “It really comes down to knowing your limits and what you want to accomplish. For me and a lot of other dedicated students, the learning experience and networking opportunities at Expo are worth missing a few classes.”

Brennan's Cellars to open in December