Home » Goldenrods for the garden
gardening 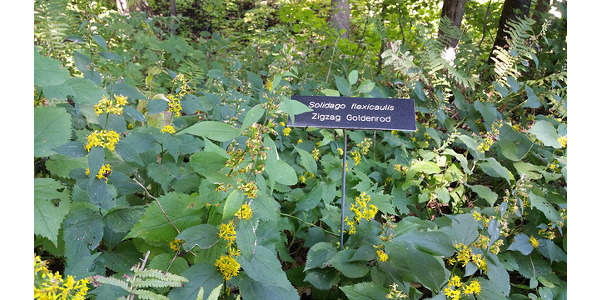 Solidago flexicaulis ‘Variegata’ offers gold-mottled leaves. The study showed this variegation was strong in the spring and weakened by late August. (Kjeannette via Flickr)

URBANA, Ill. — When August arrives, our gardens start to show off their late summer beauty. Butterflies flit from plant to plant, often alighting on members of the Solidago species, commonly known as goldenrods. This native plant has gained popularity in recent years.

“Years ago, goldenrod was erroneously blamed for hay fever,” says University of Illinois Extension educator Martha Smith. “People assumed that its bright yellow blooms had to be what caused sneezing and watery eyes in late summer.”

The falsely accused goldenrods were pulled from ditches to be sprayed or burned. Now we know, Smith says, that the true culprit is the fairly unattractive ragweed, an Ambrosia species. Goldenrod pollen is sticky and requires an insect to be transmitted, while ragweed pollen is fine, dust-like, and blows in the wind – and into the passerby’s eyes and nose.

“At the same time we were attempting to eradicate the native goldenrod plant, Europeans were snatching it up and hybridizing shorter cultivars for the cut flower industry,” Smith says. “Now, we are buying them back!”

The Chicago Botanic Gardens conducted a five-year study of Solidago species to determine the best goldenrods for Midwestern gardens. The project evaluated 25 species and garden hybrids to assess ornamental traits, disease and pest resistance, and environmental adaptability. Plants were grown in typical conditions for Midwestern gardens.

The best overall rating went to Solidago rugosa ‘Fireworks.’ Tiny yellow flowers appear in September on curved threadlike panicles, creating the effect of fireworks and attracting monarch butterflies. Sturdy stems grow to 3 or 4 feet with foliage that is only mildly affected by powdery mildew.

The garden hybrids ‘Baby Sun’ and ‘Goldkind’ share many of the same qualities as ‘Fireworks’ but on a shorter plant. Neither grow taller than 3 feet, with strong stems that rarely flop. Both start to bloom in July.

‘Crown of Rays’ is a cultivar often seen in the trade. It is similar to habit size and floral character to Baby Sun and Golden Baby, but has more powdery mildew injury and some winter injury.

Solidago sphacelata ‘Golden Fleece’ is a compact goldenrod – approximately 22 inches – with heart-shaped basal leaves and airy floral displays. Late in the season, crowns begin to open, giving a lazy appearance. The plants spread in the third season. ‘Golden Fleece’ starts to bloom in August and continues into November.

Solidago flexicaulis ‘Variegata’ offers gold-mottled leaves. The study showed this variegation was strong in the spring and weakened by late August. The sulfur yellow flowers grew to 3 to 4 feet on wiry zigzagged stems. This goldenrod is rhizomatous and will spread at a modest rate.

“Goldenrods have a place in our gardens,” Smith says. “Those interested in attracting butterflies and other guests to late summer gardens will find them invaluable. Now that we have shorter cultivars, there is a goldenrod for every garden.”

Hog prices continue to be higher