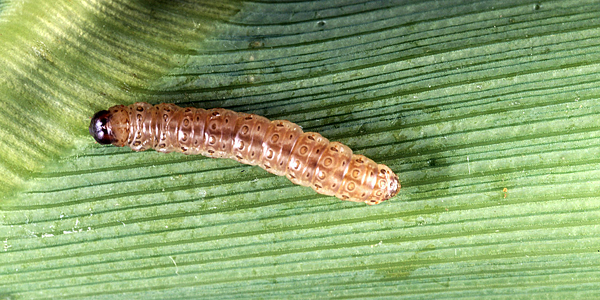 The larvae of the European corn borer is deadly for field corn. (Rutgers University)

NEW BRUNSWICK, N.J. — Field corn, genetically modified to produce a toxin that kills its most persistent pest, also benefits nearby, unmodified crops vulnerable to the same pest, according to a study published today in the Proceedings of the National Academy of Sciences.

Kristian Holmstrom, research project coordinator in the Vegetable Integrated Pest Management program in Rutgers’ New Jersey Agriculture Experiment Station, is a co-author of the study and provided New Jersey data. Holmstrom manages information from a network of more than 60 insect survey traps that catch the European corn borer, a moth introduced to the United States about 100 years ago. The data for the study came from these traps, which, he says, have been catching fewer European corn borer moths each year for more than a decade.

“The corn we’re talking about here is field corn, grown mostly for grain production,” Holmstrom said. “Back in 1996, the commercial seed industry was able to incorporate genes from a soil-inhabiting bacterium called Bacillus thuringiensis, or Bt, into some field corn. The corn then uses these genes to produce a toxin that kills the larvae of the European corn borer.”

Genetically engineered field corn was so successful that it now makes up more than 80 percent of current field corn plantings, Holmstrom said. As the acreage of genetically engineered corn increased in the mid-Atlantic region, other crops that hadn’t been modified but were vulnerable to that pest became less threatened — particularly, bell peppers and green beans, both economically important to New Jersey agriculture.

This study uses 40 years of data on insect populations and infestation rates to show for the first time, the positive off-site effects attributable to genetically engineered corn’s regional suppression of the European corn borer. Those effects include reductions in required insecticide applications on sweet corn and bell peppers in New Jersey.

“European corn borers readily lay their eggs on corn plants,” Holmstrom said. “The corn tissue is toxic to the larvae, but the moths don’t know that, so they keep laying their eggs there. The larvae die — in fact, over time, the population collapses — so there are fewer corn borers around to bother other crops, including non-modified crops. The Bt toxin does not harm other insect pests of these crops, including aphids and beetles.”

Holmstrom and his colleagues want farmers to understand which pests threaten which crops and how best to combat them, and they want to use natural means whenever possible.

“We want farmers to use pesticides less often and to use less pesticide when they do use them,” he said. “This study shows that this particular genetic modification dramatically reduces the population of European corn borers, which are pests that farmers would have to kill with pesticides if the modification weren’t there. Monitoring programs like ours are critical to our ability to evaluate economic impacts of this technology, as well as guard against potential risks such as the development of resistance in target pests.”

With flower preferences, bees have big differences
May 30, 2019