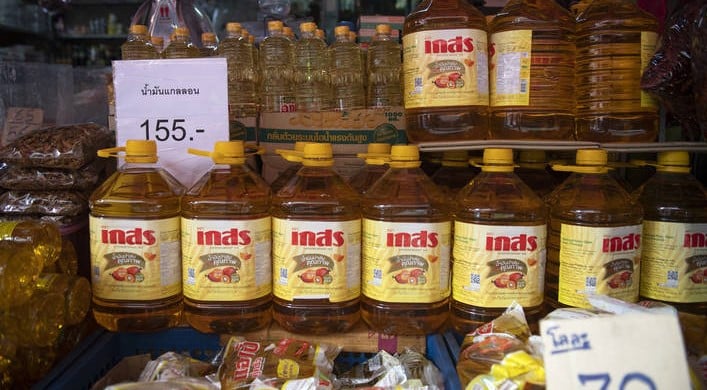 Palm and soybean oil for sale at the Klongtoey market in Bangkok, Thailand. (Courtesy Photo)

ROME — In June, global food commodity prices rose for the first time since the beginning of the year driven by a rebound in vegetable oils, sugar and dairy quotations. However, in the cereals and meat markets, most prices remained under downward pressure amid market uncertainties posed by the COVID-19 pandemic.

The FAO Food Price Index, which tracks international prices of the most traded food commodities, averaged 93.2 points in June, some 2.4 percent higher than the previous month.

Effective from July 2020, the price coverage of the Food Price Index has been expanded and its base period revised from 2002- 2004 to 2014-2016. For more details on this revision, see the feature article published in the June 2020 issue of the FAO Food Outlook. A November 2013 article contains technical background on the previous construction of the Index.

The FAO Dairy Price Index rose by 4.0 percent from May, marking the first increase after four months of successive declines. Renewed import demand for spot supplies, especially from the Middle East and East Asia, coupled with seasonally declining supplies in Europe and limited availability of uncommitted supplies in Oceania, underpinned the recent price increases.

The FAO Cereal Price Index declined 0.6 percent from May. Downward pressure on wheat prices in June was in part due to new harvests in the northern hemisphere and improved production prospects in a number of major exporting countries, including the Black Sea region.

The FAO Meat Price Index fell 0.6 percent from May, averaging 6.0 percent below its June 2019 value. Bovine meat and poultry price quotations fell, largely due to increased export availabilities in major producing regions, whereas pig meat prices registered a small increase, mostly in Europe, on expectation of the further easing of COVID-19 market restrictions.

World cereal production is poised to reach a new record level of 2 790 million tonnes in 2020 – up 9.3 million tonnes from the May forecast – surpassing the record-high registered in 2019 by as much as 3.0 percent, according to FAO’s Cereal Supply and Demand Brief, also released today.

Wheat production forecasts have been raised for India and the Russian Federation, more than offsetting a cutback to the EU and the UK expected outputs.

The forecast of world coarse grains production in 2020 has also been revised up to 1 519 million tonnes, up 5.7 million tonnes from the previous month, reflecting expectations of larger outputs of barley in Australia, the EU and Turkey.

World cereal utilization in the year ahead is forecast to rise to 2 735 million tonnes – 1.6 percent up from the previous month’s forecast, mostly driven by an upturn in feed and industrial uses of coarse grains compared to earlier expectations. World rice utilization is also predicted to reach a fresh peak of 510.4 million tonnes in 2020/21, 1.6 percent up from June, based on expanding food use.

Reflecting new production and consumption forecasts, FAO now expects world cereal stocks by the end of seasons in 2021 to reach 929 million tonnes, representing a robust year-on-year expansion of 6.0 percent. This would drive the global cereal stock-to-use ratio in 2020/21 to a twenty-year high of 33.0 percent, highlighting the comfortable global supply prospects in the new season.

While conflicts and weather shocks remain critical factors underpinning the high levels of severe food insecurity in countries requiring external assistance for food, the COVID-19 pandemic is also having wide-ranging and severe effects, particularly through the loss of income, according to the quarterly Crop Prospects and Food Situation report, also published today.

The report offers a special feature with regional roundups of the pandemic’s impacts.

Despite these issues, the global cereal harvest is on track for growth in all regions, except for Europe. Cereal production in Africa in 2020 is projected to increase by 1.0 percent, although declines are expected in northern, western and central regions of the continent.

FAO’s forecast for the aggregate cereal output of Low-Income Food-Deficit Countries in the 2020/21 season stands at 492.7 million tonnes, which is 6.0 percent above the average and would mark a fifth consecutive annual production increase. However, populations are growing even faster and the overall cereal import requirement for LIFDCs is estimated at 73.4 milion tonnes, up around 5 percent from the previous year, which also reflects production downturns in several countries.

Checkoff program to market hemp on the horizon