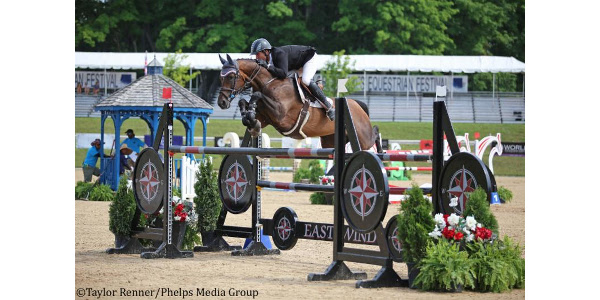 TRAVERSE CITY, Mich. — Thirty-seven international show jumping athletes turned out at the Flintfields Horse Park on Friday afternoon to kick-off FEI competition in the Grand Prix Ring during Week Three of the Great Lakes Equestrian Festival (GLEF). In the end, Andrew Kocher of the United States flew to the win aboard Ciana, owned by Eagle Valley Partners LLC, in the $35,000 Welcome Stake CSI2*.

As third in the order for the jump-off, veteran partners Wilhelm Genn (GER) and Bugatti, owned by Eduardo Leon, set the pace to beat at 40.42 seconds.

Kocher saw a small window of opportunity to surpass Genn on the leaderboard and when he and the 10-year-old KWPN mare returned to the Grand Prix Ring nine trips later, he decided to go for it. His decision paid off as the pair stopped the timers in a speedy 39.30 seconds to take home the blue ribbon and winner’s wine, courtesy of Black Star Farms. Kocher also finished sixth with his second mount qualified for the jump-off, Prof De La Roque, owned by Postage Stamp Farm LLC.

Genn finished behind Kocher in second place, while Santiago Lambre (MEX) and his own Casino N rounded out the top three in 41.18 seconds.

On his plan in the jump-off:
“I went first with Prof De La Roque and I was a little wide in a few spots and a little conservative. I thought [Ciana] was jumping really sharp, probably the sharpest one I had today, and I thought I’d give it a go. I was kind of planning on saving it for Sunday but I just can’t help it. I saw there was a door open and I was going to take a shot.”

On Ciana:
“Karen Cobb bought her in Holland three years ago. Now she’s getting some experience. I couldn’t steer her when we tried her and she jumped over a standard out of a combination and we got in the car to leave and Karen was like, ‘Well, I bought you that horse.’ I was happy but I was also thinking, ‘How am I going to learn to ride her?’ She immediately won classes. She wins a lot but she’s also streaky. She hasn’t figured out lights under a stadium yet. She’ll get a little stressed about that, but in a setting like this, kind of wide open, she’s perfect. In 2* and 3* competitions, she’s very much a competitor. The 4* we’re still working on. The goal for the year is for her to start winning at the 3* and 4* level.”

The professional hunter divisions earlier in the week saw Meagan Murray-Tenuta of Buena Vista Farm and So It Goes, owned by Jessica Lewis, claim championship honors in the Green 3’6″ Hunter division on Thursday.

The pair picked up two red ribbons on Wednesday in the first over fences round and handy portion of the competition. On Thursday, Tenuta and the 9-year-old Dutch Warmblood gelding placed first and second in the final two over fences classes to secure the tricolor ribbon. The reserve championship went to Lauren Crooks and Ubella Du Rouet, owned by Crooks Show Jumping LLC.

In the Green 3’9″ Hunter division, Hillary Johnson of Meadowview Farm based in Lowell, Michigan, and Voyager took home top honors after finishing third in Wednesday’s first over fences class and first in the handy round to kick-off the division.

The professional rider and the 9-year-old Warmblood gelding, owned by Copper Fox LLC, returned to the Vankampen Ring on Thursday and swept the final two over fences classes as well as the undersaddle for the championship title. Johnson also grabbed reserve championship honors with Cassano, owned by Heather Joseph.

On So It Goes:
“So It Goes was imported a year ago. He came to me as a sale horse. He’s a great amateur and junior hunter horse. He did the Large Juniors a little in Wellington and got some good ribbons. He’s just gotten better and better. He starts jumping higher and higher the more he shows so he’s been really fun. He’s a really cool horse because he doesn’t take a lot of preparation. You can just walk right in the ring. He was definitely a little impressed by the jumps and was jumping quite high over everything on Wednesday. He’s really handy so I think the handy round was probably our best trip for sure.”

On Buena Vista Farm:
“Buena Vista Farm is in Zion, Illinois, and my client Becky Price purchased it back in the fall. It’s very exciting because I took it over – managing 60 stalls. It’s a beautiful facility. Since then, the business has really gained a lot of new horses and is growing. We’ve had a pretty successful year. I’m excited!”

On GLEF:
“This is my favorite horse show of the year. I literally talk about it all year. It’s so well run, so organized and the horses are very happy here.”

On Meadowview Farm:
“[Meadowview Farm] is a family run business. My parents started the farm 32 years ago. My dad plays professional polo and my mom does the hunter/jumpers with me, which is wonderful. I still get to spend a lot of time with my family even though we’re on the road a lot.”

On Voyager:
“Voyager is 9 this year. We’ve had him since he was a Pre-Green. I just love riding him. He’s got the coolest jump and he’s been a lot of fun to bring along. He’s not exactly my type of ride. He’s got a little ego. I have to be tough with him, which is not my normal sort [of ride]. [Wednesday] I think I was a little too nice to him and [Thursday] he went phenomenal. I was really happy with that.”

On GLEF:
“We love this show. It’s close for us and a lot of our clients love coming up here in the summer. Where else could be better in July? There’s always a nice breeze and the facility is beautiful, we love it here. We stay here for one more week and then we take a few weeks off at home and go down to Kentucky for the [Bluegrass Festival Horse Show] for the Pre-Green Incentive Championship and [USHJA International Hunter Derby Championship].”

Sixteen-year-old Matthies, who trains with Melissa Hirt of Northern Pines Farm based in Maple City, Michigan, and the 11-year-old Holsteiner gelding swept both phases of the competition, placing first in the hunter and jumper phases, to take the overall first place prize.

For the second week in a row, Brooke Giacin, trained by Tiffany Morrissey of East Wind Farms, took home top honors in the Taylor Harris Insurance Services National Children’s Medal with her own Shannaghmore.

Lielle Rhodes, trained by her dad Kobi, and Carry Away impressed the judges to win the Pessoa/US Hunter Seat Medal, presented by Randolph College, earning her an invitation to this year’s 2017 Dover Saddlery/USEF Hunter Seat Medal Final at the Pennsylvania National Horse Show in October.

In the ASPCA/NHSAA Maclay Horsemanship class, Nicholas Pongracz, trained by Sharrone Peters, and Cassano, owned by Heather Joseph, bested the top field of junior riders to claim the win.

Weeks Five and Six will also feature Equitation Tuesdays. This new addition to the GLEF schedule provides equitation exhibitors the opportunity to collect double the amount of valuable qualifying points per week in one location.

On Blurred Lines:
“[Blurred Lines] is owned by Don Stewart and I got him in December of last year. He is an amazing equitation horse. He has a lot of experience. He’s perfect for me because he needs enough leg but enough hand that I don’t feel like I have too much at any point in time. He’s also nice because he’s been to all of the finals, which is great because my other equitation horse, Conto Blue who I own [with Dudley Smith], is less experienced and more green to the equitation so it’s nice to have both of those rides.”

On what sets her rounds apart from the rest of the competition:
“I think something that sets my rounds apart is my horse, first off, has a very large stride so everything is very smooth and I get down the lines easily. I have the ability on [Blurred Lines] to make everything match. He’s so smooth and comfortable that it looks as good as it feels. It’s very nice for me specifically [to compete here on Equitation Tuesdays] because I’m qualified for the Talent Search, the Medal and the Maclay, but for Washington, because it’s cumulative points, it’s double opportunities each week to get those points and stay in the top.”

On GLEF and her plans for the rest of the summer:
“I really like it because it’s so close to home. I’m able to stay at home every night and the horses get to go home every week so they get turnout and time in their own stalls – it’s just an amazing showgrounds. It’s beautiful up here. I’ll stay here until Week Five and then Week Six I’m going to go to Zone 5 Championships at HITS Balmoral with my jumper, Peninsula Emerald Lass. After that, I won’t go anywhere until Illinois Hunter/Jumper Finals, which is the weekend before Maclay regionals [at the Kentucky National Horse Show], and then we’ll travel for finals.”

Gratiot County Breakfast on the Farm