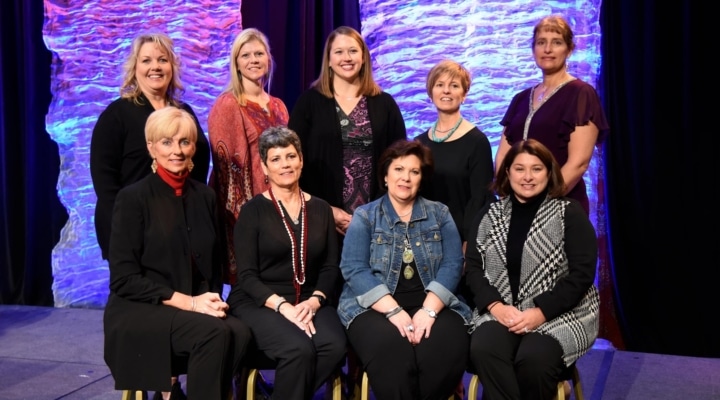 “I hope to bring more members into the Auxiliary to achieve our mission of supporting youth and promoting the breed,” Hope said. “We want to strengthen the committee members with former NJAA members, and we have a few chairing committees this year. The fresh ideas will be much appreciated.”

Hope grew up in Vienna, Virginia, just 10 miles outside of Washington D.C., and after graduating high school, she moved to Clarke County, Virginia, where she currently resides. After her daughter, Catie, started showing Angus in 4-H and FFA, Hope joined her on junior activities trips and supported her when she competed for Miss American Angus. She started as a regional director before being elected president-elect in 2018.

“I’m excited about working with the team we have for another year of having fun and getting our work done,” Hope said.

The Auxiliary also awarded Nancy Thelen the 2019 Distinguished Woman Award during the annual Auxiliary Breakfast. Throughout her life, she has been focused on youth within the agricultural community, stressing youth development.

“It’s been said she is the only one in her state to have served as president of the National Junior Angus Association, president of the state Angus Auxiliary, and the state Angus Association,” said Leslie Mindemann, Distinguished Woman committee chair, during the breakfast. “And [she is] the only woman to have presided over the adult organization.”

Thelen has led numerous committees; served as secretary/treasurer, president-elect, president and advisor; as the Auxiliary go-to historian; and has served the past ten years as finance chairman. Thelen also was Miss American Angus in 1970-71.

The award is given to an American Angus Auxiliary member who has served in various capacities to further the goals of the Auxiliary. Recipients have proven to be long-time champions of the organization. They have devoted time as officers, committee members and many other roles all for the betterment of the Auxiliary. Since 1960, 27 have received this award.

How can growing seasons be extended?