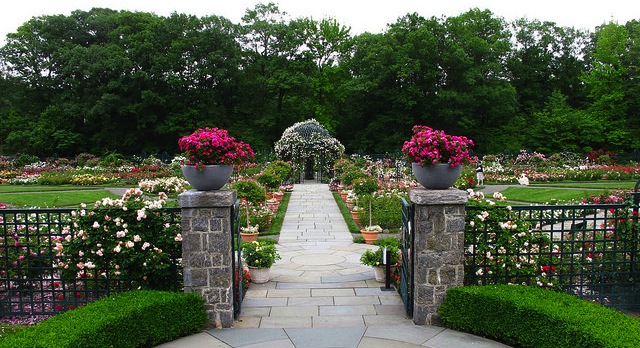 WASHINGTON — The period Mark Twain dubbed “the Gilded Age” was one of extreme wealth and ostentation, of robber barons amassing great fortunes, of glaring chasms between rich and poor. It was also a time when some of the nation’s grandest gardens were constructed.

“These were incredibly competitive, extravagantly wealthy people with tremendous pride in America. They wanted the country to be viewed as cultured and grand, and their hope was to create gardens that equaled, and ideally surpassed, the great gardens of Europe,” says Todd A. Forrest, vice-president of horticulture and living collections at the New York Botanical Garden, founded in 1891.

The Gilded Age lasted from the 1860s and ’70s to just after the turn of the century. Some of the gardens were meant to be exquisite private gems, while others, such as the New York Botanical Garden, were intended to edify, inspire and uplift the public.

A handful of new and recent books pay tribute to their enduring importance.

Dozens more Gilded Age gardens languished but have been restored and opened to the public in recent decades. “Rescuing Eden,” by Caroline Seebohm and Curtice Taylor (The Monacelli Press, 2015), and “The Shelburne Farms,” by Glenn Suokko (Rizzoli, March 2017), tell of heroic efforts by communities and conservancies to resurrect great gardens that had fallen into ruin in the mid-20th century, usually for lack of funding and attention.

“For ages, Americans didn’t think much about the glorious gardens of this era, and people are suddenly seeing that there are these stunningly beautiful places across the country, and that many had gone neglected,” Seebohm said. Her book features Gilded Age gardens across the country, including in Georgia, New Hampshire, California, Kentucky, Maine, New Jersey, Texas and South Carolina.

“The brilliant thing is that every single one of these gardens has been resurrected and is now open to the public,” she says.

“The Rockefeller Family Gardens,” (The Monacelli Press, April 2017) by the New York Botanical Garden’s Forrest and Larry Lederman, is a multi-generational story that to some extent traces the changing ideals of American gardens.

And Sam Watters’ “Gardens for a Beautiful America” (Acanthus Press, 2012) features meticulously identified photos of some of the most opulent gardens of the time.

One inspiring story of a garden’s rise, fall and rebirth is that of the little-known Untermyer Gardens in Yonkers, New York, featured in “Rescuing Eden.”

“It had really fallen into total ruin and was pretty bleak for decades, but the garden, which was one of the truly great gardens of the Gilded Age, is now in the full flowering of its second life, largely thanks to a fellow named Stephen Byrnes,” Seebohm explains.

Byrnes, who stumbled upon ruins in what remained of the garden in the 1980s, became founder and president of the Untermyer Gardens Conservancy.

In its heyday, the garden, where Isadora Duncan once danced and parties and poetry readings were held, sprawled over 150 acres with a view of the Hudson River Valley. It was part of a lavish estate belonging to Samuel Untermyer, a New York lawyer who opened it to the public weekly for 25 years and intended it to remain open for posterity.

“The piece de resistance of the garden was a walled garden with crisscrossing canals,” Seebohm says.

“But sometimes people don’t think their endowments through very carefully, and when Untermyer died, he left it to the town of Yonkers, which didn’t have the means to maintain it,” says adds.

Thanks largely to Byrnes and the conservancy, the garden is now a Yonkers city park. It once again features its stunning Walled Garden, inspired by those of Indo-Persian antiquity, with reflecting pools teeming with exotic water lilies. The mosaic floors of the loggia are once again intact. And a long outdoor staircase punctuated by Roman-style columns offers dramatic, unobstructed views of the Hudson, just as it did in the Gilded Age.