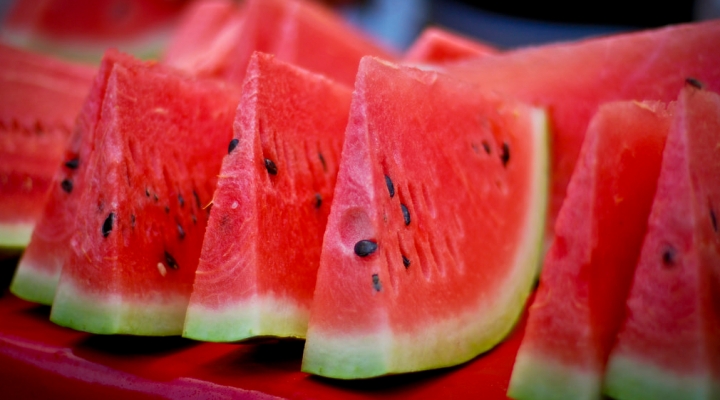 Once Florida's official watermelon, the Florida Favorite variety largely disappeared around World War I when it fell out of favor due to not being pest-hardy enough. (Harsha K R, Flickr/Creative Commons)

LAKELAND, Fla. (AP) — Under a mossy live oak on farmer Will Crum’s farm, chef Greg Baker thumped a watermelon. They both listened — a low tone, a little hollow-sounding.”Can I get a little more reverb?” Baker joked, giving it another gentle rap.

It was ready. A bit of Florida history was made. Together, Baker and Crum have brought back the Florida Favorite.

Once Florida’s official watermelon, it largely disappeared around World War I when it fell out of favor due to not being pest-hardy enough. With the help of local bees, Crum, 33, has rehybridized it.

Holding down the major melon, maybe 30 pounds, to keep it from rolling off its tiny, rickety wooden table, Crum thrust his knife deep, the two halves falling apart dramatically. It was the first time anyone had seen inside this fruit in 100 years. Dark fuchsia, thick white rind, black and white seeds, dark green glossy skin with a faint zigzag pattern. Crum cut Baker a wedge, then himself.

To get a baby Florida Favorite, you first need its parents to get together. The parents here are named Georgia Rattlesnake and Bradford.

Everyone knows the Georgia Rattlesnake watermelon, even if not by name. It’s the stuff of kids’ drawings, of countless backyard barbecues, seeds spit far across the lawn. It’s a Southern favorite, good for shipping, skin zagged with a light and dark green pattern like its namesake.

The Bradford is another story.

“The Bradford is just about the sweetest melon, almost like a dark caramel, or cotton candy,” said Baker, 50, leaning over one of the oblong, dark green parent melons in Crum’s field.

Bred by Nathaniel Napoleon Bradford in Sumter, S.C., in the 1840s and 1850s, it’s one of the oldest surviving North American watermelons. It was popular through the 1910s, but died off as a commercial melon. Although it had a thick rind, its skin was more fragile, it didn’t ship well, and it was not as disease resistant as other breeds. The Bradford family, however, kept right on growing it for personal use, generation after generation.

It came back from near extinction in an interesting way about a decade ago.

David Shields, a professor at the University of South Carolina and an expert in Southern foodways, began hunting for the fabled sweet Bradford melon at seed banks and seed saver exchanges. He found Nat Bradford, a descendent of the original grower.

Shields got the word out, and from there, James Beard award-winning chef Sean Brock raised the Bradford melon’s profile via watermelon molasses and rind pickles at his restaurants Husk and McCrady’s in Charleston, and High Wire Distillery in Charleston pressed Bradfords to make high-end brandy.

When Greg Baker and wife-partner Michelle opened Fodder and Shine in 2015 in Seminole Heights, they were trying to do something no one had ever done: a restaurant that was an academically rigorous re-creation of Florida Cracker food from about 1820 to the Depression. That’s when they met Crum, a seventh-generation Florida farmer with a reverence for forgotten and heirloom Florida species.

Could he grow Everglades tomatoes for them? High bush Florida eggplants? Cushaw squash and datil peppers? Could he grow Bradford watermelons? Only one way to find out. Crum started growing, all organically and under the watchful eye of lots of ladybugs.

When David Shields saw on Facebook that Crum and Baker aimed to grow Bradfords, he said, “You know, Florida had a state watermelon called the Florida Favorite.”

Crum had only the picture on a vintage seed packet from eBay to go on. He took a whole back field and grew 150 Rattlesnakes and 150 Bradfords in rows next to each other, allowing the bees to cross-pollinate. And then in early March, he planted the next generation of seeds.

“When the plants came up, they were runty,” Crum said, looking out over a single melon plant that extended 20 feet square with 10 Goliath melons nestled in the foliage. “But I didn’t have to helicopter-parent the plants. And when the first melon set, I could tell it was different. It looked like the seed packet from way back when.”

Baker aims to unveil the Florida Favorite at his restaurants, using everything from skin to rind to seed to flesh.

Another thing Baker and Crum share is musicianship. Baker was in a punk band for years; the house at the edge of Crum’s farm is packed with five guitars, a drum kit, upright piano, organ and other music miscellany.

Growing the watermelon fostered a similar harmonic partnership. They compared the flesh of the Bradford to that of the Florida Favorite. The latter is bigger, fatter, with much more red meat but plenty of white rind for pickles. It’s sweet and juicy, not too seedy, not fibrous but also not at all mushy.

The tragedy, according to Baker: The more we breed plants for transportability or the perfect market size, the more flavor becomes an afterthought.

A summer shower cut the watermelon reverie short and they packed up the remains, the long chef’s knife and red flesh like an impromptu medical procedure under the canopy of live oak.

“I may not have done much,” Baker joked as the droplets came quicker, “but I’ve brought back a watermelon from the dead.”