Home » Getting to the roots of weed invasion 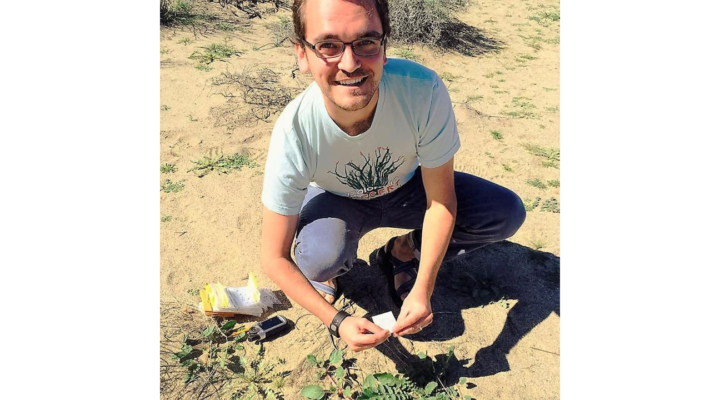 SAN DIEGO, Calif. — In 2015, a rural community in southeastern California approached Daniel Winkler and his doctoral advisor, Travis Huxman, for help with an invader that was hurting their local economy. An Old World annual plant called Sahara mustard (Brassica tournefortii) was spreading rapidly through the deserts of the southwestern U.S., carpeting the local Anza-Borrego Desert in spring, and smothering the native wildflowers that draw tourists to the region. Loss of native plants put the animals that depend on them for food and shelter at risk. The mustard was disrupting the entire desert ecosystem.

The Tubb Canyon Nature Conservancy asked Winkler to take on a project to learn what enabled Sahara mustard to adapt so successfully — and, hopefully, gain insight into how to stop it. Winkler will report his findings on August 11, at the Ecological Society of America’s 2017 Annual Meeting in Portland, Oregon.

“In 2015 I went on the greatest American road trip — 5000 miles of highway, dirt roads, and trails — to visit over 50 sites in California, Arizona, New Mexico, Texas, Utah, and Nevada, the current range of Sahara mustard in the U.S.,” said Winkler. He collected 2,000 leaf samples and up to a million seeds.

The project was a good fit for Winkler, who was already studying native flowers in the Sonoran. It also benefited from his years working at the U.S. Bureau of Land Management and the Fish and Wildlife Service prior to pursuing a doctoral degree in ecology. His collection road trip included stops at ten national parks and monuments. He collaborated with park managers, citizen scientist programs, and volunteer groups to obtain samples.

“It’s usually a challenge to get permits to work in these parks, but in this case I got immediate calls back. The land managers have no idea how to stop the spread of Sahara mustard. It grows fast, self-fertilizes, and each plant can produce up to 10,000 seeds. It’s a real problem,” said Winkler.

Back in the lab, Winkler investigated the plant’s adaptation to local conditions through multigenerational garden experiments with seeds from ten representative locations selected from his collecting road trip, spanning the Sahara mustard’s range. He found that the timing of seed germination, leaf growth, and flowering had shifted to take advantage of temperature and precipitation patterns in the landscapes it invaded. Sahara mustard grows very fast in response to variable winter rains.

Sahara mustard’s native range is southern Europe, northern Africa, and most of the Middle East. It is believed to have been introduced into California’s Coachella Valley in the 1920s, and began spreading notably in the Southwest in the ’80s and ’90s, with explosive growth only in the last 20 years or so. The relatively recent establishment lends hope that it can be eradicated, said Winkler. His next step is to collect samples in the native range to compare to plants in the U.S. to learn more about the original introduction of the plant in North America.

Winkler, a Ph.D. student at the University of California, Irvine, was a recipient of a 2016 award from the Ecological Society’s Forrest Shreve Student Fund, which supplies $1,000-2,000 to support ecological research by graduate or undergraduate student members of ESA in the hot deserts of North America (Sonora, Mohave, Chihuahua, and Vizcaino). Support from the award will fund rapid “next generation” DNA sequencing to uncover unique genetic signatures for each plant. By comparing the genetic signatures, he will learn how similar plants growing across the U.S. southwest are to each other, and to populations in Sahara mustard’s native range. Identifying the source location, or locations, of the U.S. invasion, he said, could aid in finding biological control agents.

—Ecological Society of America
via EurekAlert!