Home / National / Getting to the core of a more nutritious apple 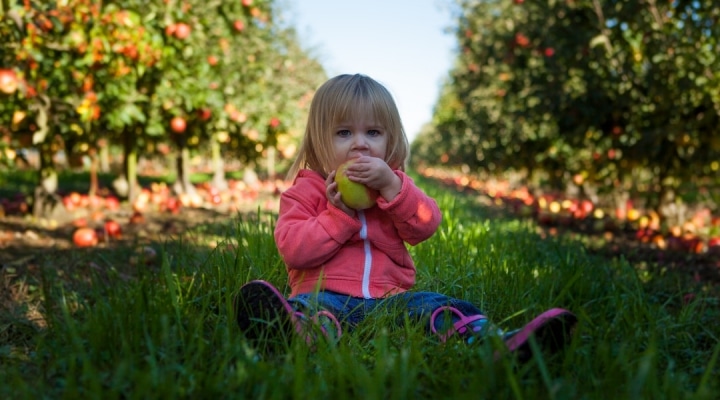 “It’s an approach that allows us to better understand how apple genetics affect the production of many compounds in apple fruit. We wanted to help develop tools that make this process simpler and allow people to use data to make decisions about the apple breeding process,” said study author Jessica Cooperstone, assistant professor of horticulture and crop science at Ohio State. (Photo by Patrick Fore on Unsplash)

COLUMBUS and WOOSTER, Ohio — A new platform housing data from over 100 apple varieties could shave years off of the breeding process and enable data-driven assessments of how to boost the health benefits of America’s favorite fruit.

This new analysis platform developed by a team of Ohio State University scientists combines the genetics behind specific traits and information on hundreds of chemical compounds – from sugars and acids to a host of antioxidants – in the fruit that help make apples a healthful food.

By showing relationships between genetics and compounds in apple fruits known as phytochemicals, the platform has potential to take some of the guesswork, and time, out of the breeding process: It typically takes about seven years to get from mating parent varieties to the first taste test of a new kind of apple, and it could take decades to create a completely new cultivar.

Additionally, complementary research on phytochemicals that may provide health benefits could give researchers a head start on studies to confirm which compounds offer the best chance to develop a more nutritious apple, said study author Jessica Cooperstone, assistant professor of horticulture and crop science at Ohio State.

“It’s an approach that allows us to better understand how apple genetics affect the production of many compounds in apple fruit. We wanted to help develop tools that make this process simpler and allow people to use data to make decisions about the apple breeding process,” she said.

Cooperstone specializes in chemical compounds called metabolites that make apples and tomatoes nutritious. She and her colleagues focus on figuring out how to create and grow the most healthful versions of these crops as possible.

“If we can improve the nutritional quality of crops, we should. My philosophy has always been to improve foods people already eat – let’s not improve something and then have to convince people to eat it,” said Cooperstone, who also has a faculty appointment in the Department of Food Science and Technology. “The foods that people already want to eat create an opportunity to have impact. That’s what we’re really trying to do with our apple work.”

The research was published online Sept. 1 in the journal New Phytologist.

Co-authors on the study, all from Ohio State, include Kathryn Williamson and Emmanuel Hatzakis of food science and technology, and Diane Doud Miller and Jonathan Fresnedo Ramírez of horticulture and crop science. First author Emma Bilbrey worked on the platform while she was a graduate student in Cooperstone’s lab.

Apples are an important crop to Ohio and the Midwest, and are the No. 1 fruit consumed by Americans – apples constitute about 25% of all fruit eaten in the United States.

The 124 apples analyzed in the study included common varieties such as Honeycrisp, Gala, Fuji and Golden Delicious as well as wild apples and prospective varieties being evaluated by Midwest growers.

Genome-wide analysis of each apple enabled identification of genetic markers associated with metabolites that influence traits like flavor, disease resistance and texture. The researchers used high-resolution mass spectrometry and nuclear magnetic resonance to detect phytochemicals in the apples in a “global” way – an approach called untargeted metabolomics.

The team then took on the larger challenge of integrating all the data to determine genotype-metabolite relationships that could guide apple breeding decision-making and inform nutrition studies of links between specific chemical compounds and health benefits. As part of the integration, the researchers assembled the data in a way that showed every genetic marker that had an association with production of at least one phytochemical.

“We looked for strong relationships at locations in the genome that are not well studied in apple and looked for which compounds we could identify and which had nutritional value. We could go from untargeted data all the way to finding candidate genes responsible for compound production – which researchers can then validate,” Cooperstone said.

“The goal is to do this in a holistic way so you’re not improving nutrition while sacrificing yield, disease resistance and flavor – you’re considering all of these components of having a good and productive apple, and putting them together and trying to improve it globally.”

From here, the team plans to use the data to get a better understanding of health-promoting compounds of interest and employ biotechnological approaches that could speed up flowering and fruit production in apple trees.

This work was supported by the Foods for Health Discovery Theme at Ohio State, the U.S. Department of Agriculture and the Ohio Agricultural Research and Development Center. The study made use of the Ohio Supercomputer Center and the Campus Chemical Instrument Center NMR facility at Ohio State.

Insider Q&A: Pressing for fair play for US family farmers