Home / Florida / Getting to the bottom of blossom-end rot 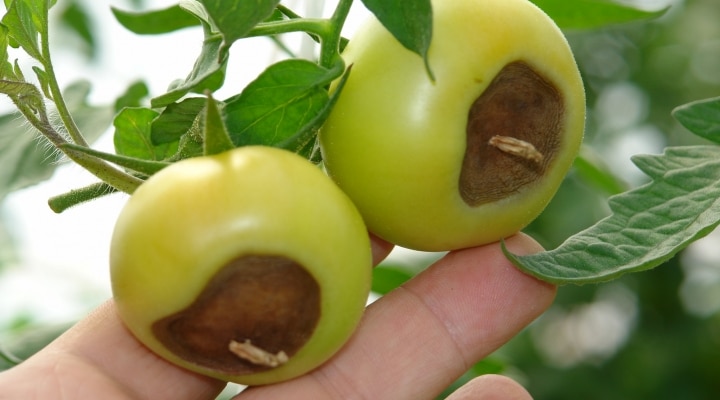 Home gardeners and commercial farmers alike can attest to the disappointment of seeing a beautiful tomato ripening on a vine, only to discover that the fruit has dark, sunken pits at the blossom end of the fruit. Called blossom-end rot (BER), this physiological disorder is prevalent in fruit and vegetable crops, including tomatoes, and can cause severe economic losses. (photo by Scot Nelson, Creative Commons/flickr.com)

ATHENS, Ga. — Home gardeners and commercial farmers alike can attest to the disappointment of seeing a beautiful tomato ripening on a vine, only to discover that the fruit has dark, sunken pits at the blossom end of the fruit. Called blossom-end rot (BER), this physiological disorder is prevalent in fruit and vegetable crops, including tomatoes, and can cause severe economic losses.

Through a $475,000 grant from the U.S. Department of Agriculture’s National Institute of Food and Agriculture (USDA-NIFA), University of Georgia researchers are looking for the genetic and developmental factors of BER with goals of investigating causal mechanisms and developing prevention and mitigation strategies for the disorder.

Led by Savithri Nambeesan, an assistant research scientist specializing in ripening and postharvest physiology in the UGA Department of Horticulture at the College of Agricultural and Environmental Sciences (CAES), the study will compare the genetic traits of tomato lines that are susceptible and resistant to BER through genetic mapping to try to identify the regions in the genome that cause BER. It will also examine developmental and molecular contributors to the disorder.

“If we can find the factors that lead to BER, we can use that information to tailor management practices to minimize the disorder,” said Nambeesan, who is working on the project with horticulture professor and plant geneticist Esther van der Knaap, who has done extensive work on tracing tomato genomes.

The U.S. tomato crop was valued at more than $1.6 billion in 2019. In severe cases, BER can cause crop losses of up to 50% of the total yield in affected fields, resulting in a significant economic loss.

Nambeesan said the disorder, which manifests in the first few weeks of growth after tomato flowers are pollinated, is influenced by genetic, developmental and environmental factors, so the study will combine molecular and developmental approaches to understand potential causes.

“Currently, the underlying cause of BER is thought to be due to calcium deficiency, but current field management strategies to correct that via irrigation and calcium fertigation have met with limited success. Generating more basic information on this disorder will help with breeding cultivars that are BER-resistant or provide more tailored management strategies to minimize this disorder,” she said. “We will determine if BER can occur in fruits that grow relatively fast during their development and therefore have higher demand for calcium. Fruit receive their calcium through vascular tissues such as xylem, and therefore investigating how the xylem develops during fruit development may be critical in understanding calcium translocation into the fruit.”

The multimodal approach to finding the underlying cause of BER in tomatoes will be useful in translating the information to other crops including vegetables and fruits such as pepper, watermelon, squash and eggplant. Because there are greater genetic and genomic resources available in tomatoes, it is the best model system for research that can translate into knowledge applicable to other crops.

“If we can tackle the problem using two approaches in molecular physiology — how fruit growth rates and xylem development tie into subcellular calcium localization — we can find the causative factors for it and we can address it more effectively,” she said. “We also are taking a two-pronged genetic approach, identifying certain loci that are involved in blossom end rot and finding genes in the genome to develop lines that are resistant.”

To read more about BER, see UGA Cooperative Extension Circular 938, “Blossom-End Rot and Calcium Nutrition of Pepper and Tomato.” For more information on research being conducted at CAES, visit caes.uga.edu/research.

The Bulldogs behind the Georgia jack-o’-lantern
October 24, 2021