Subscribe
Home / North Carolina / Getting dirty in your garden 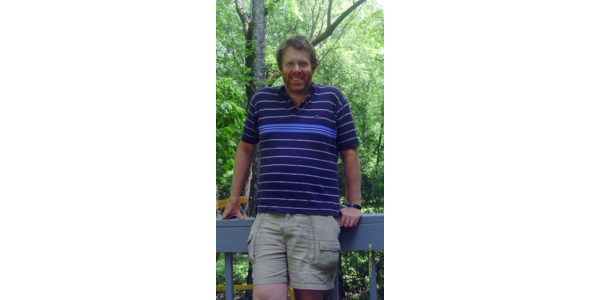 RALEIGH — Harold Johnson, Extension Master Gardener Volunteer in Durham County, interviewed Dr. Ron Sutherland, Conservation Scientist at Wildlands Network.  Learn what you need to know about finding snakes in your yard, and how they are an important part of the ecosystem!

JOHNSON: This is Getting Dirty in Your Garden brought to you by NC State Extension Master Gardener Volunteers.   I’m your host, Harold Johnson, and I’m a Master Gardener in Durham County.

JOHNSON: Beware!  Or, if you will be aware while gardening you can avoid a surprise sighting of one of the critters that coexists in our landscape.  A snake.  Dr. Ron Sutherland shared tips on living with and appreciating snakes.  Sitting on Dr. Sutherland’s deck as we talked, the wind and frog sounds in the recording confirm we were enjoying the outdoors.

JOHNSON: Ron, we should be getting rid of the snakes in our yards, because they pose a hazard. They might bite us and, come on, tell us how to get rid of them.

SUTHERLAND: I don’t think you should get rid of the snakes in your yard. Snakes are important parts of the ecosystem, whether your yard is a quarter acre or four hundred acres. There’s a variety of snakes here in North Carolina that you would have and they all play very interesting roles. They are predators on different scales. I don’t think you want to mess with Mother Nature in that respect, by getting rid of predators, especially predators that eat things that eat plants. Snakes, themselves, don’t eat any of your plants, so keep that in mind.

JOHNSON: What are they likely to find as their food source? And it depends, of course, on which snake we are talking about.

SUTHERLAND: Yeah, yeah, I mean, North Carolina has, I think, 37 odd species of snakes. A lot of those eat rodents, so they are eating your voles, your mice, your rats, you know, the small snakes–things like mole king snakes that live underground; corn snakes often live underground and they are chasing the voles that are eating your hostas. My parents are struggling over in Wake County with a vole infestation and I think I’ve got them convinced that they need more snakes. They don’t kill snakes. But even then, they’ve got too many voles, and I think it’s probably because the snakes that would be there are getting run over on the road. You get “eruptions” is the term of these prey animals like the voles, like the mice. Other snakes eat things like slugs and earthworms, frogs and other amphibians. Snakes eat those a lot. And there are some snakes that eat other snakes, like king snakes will eat other snakes.

JOHNSON: What snakes are a gardener most likely to encounter when they are gardening?

SUTHERLAND: I would say based on the reports of other people that–I’ve get a lot of people who find out that I like snakes, they show me the snakes that they see in their gardens and there is kind of a suite of little snakes and people always assume that they are babies: baby copperheads or baby “somethings” and really there’s a set of small snakes species out there: the brown snakes, red-bellied snakes, worm snakes and earth snakes. There are two types of earth snakes and they are basically similar. None of them usually get more than a foot long and in suburban–even urban settings–they can be quite common, these little guys. You can have 30 of them in your yard, and so they are more numerous and they are going to be the ones that people see when you’re turning over dirt, you find these worm snakes, you find earth snakes.

SUTHERLAND: Yes, yes. Lots of times they are in the leaf litter. If you turn over a board, or a pot or a log, these are the snakes that are most likely to be in those situations.

JOHNSON: What about what everyone sees as a copperhead?

SUTHERLAND: I think a good 75% of the time, those aren’t copperheads (laughter). There are several snakes that look superficially like copperheads–are northern water snakes that are very common in the rockier streams around the Triangle. They look a lot like copperheads, you could say. Baby black rat snakes, mole king snakes, also anything that has a pattern, any sort of grayish snake that has a pattern down the back gets mistaken for a copperhead. Even those small, little snakes are assumed to be baby copperheads and people think, “Well, maybe the baby copperheads have a different pattern!” Really baby copperheads have the same pattern as adults, but they have bright green tails, so that’s one little tip, if you are out in the garden and you find a little snake, if it doesn’t look like a copperhead and if it doesn’t have a green tail, it’s probably not a copperhead. But copperheads, that all being said, this area has a lot of copperheads. They seemed to have figured out how to survive in urban areas, in suburban areas: Chapel Hill, Carrboro, have their fair share, so does Durham. And I think North Carolina might lead the nation in copperhead bites, so they are out there and they are a cause for caution, but I wouldn’t say they are a cause for panic–just because you have copperheads out in your yard.

JOHNSON: If you encounter a snake, your advice what to do? How to respond?

SUTHERLAND: Take pictures of it and send it to somebody who likes snakes because you’ll make their day! Everybody has got a phone these days that take pictures, you know. Don’t get so close it is going to bite you. Use common sense if you don’t know what it is, but unless it’s a snake you want gone from your garden, which maybe we can talk you out of even copperheads. If you are in an area that has copperheads, removing one or two now and then is not going to effect the population; you’re just making room for another copperhead to move in. If you drive one off seven miles, you’re just making territory available for the next copperhead to move in, so even if you’re not going to mess with a snake, just let it alone. If it’s in the way, use a long stick and gently move it out of the way. Snakes are–as long as you know what the snake is–it’s rather easy to deal with a snake in a way you are not going to get bit. I think most–there’s sort of a—from what I understand in talking with some doctors and hearing some presentations by emergency room physicians and that sort of thing, there is sort of two modalities of getting bitten by venomous snakes in this area and one is the accident where you either step on it at night, or you reach in a pile of sticks and try to grab the whole pile of sticks and you get a snake in your hand. And the other one is foolish people messing with snakes, often when they are drunk. (Ha ha!) So we can assume your listeners are not going to be the latter. (Laughter). But if you are working out in the garden, you are going to have a higher than average chance of running into a copperhead and you’ve just got to use common sense: wear gloves, know what copperheads look like. Having the search image is really helpful because you are actually going to see the snake. They are not easy to see, but if you know what you are looking for, you can see them. The two things I try to do are use caution when picking up big piles of anything out in the yard or when turning something over that could have snakes. Then the other thing is at night, I use a flashlight. Anywhere the street lights are not bright enough–anywhere it is too dark to really see, then I use a flashlight because snakes are moving around.

JOHNSON: Is this the time of the year as we warm up, gardeners more likely to see a snake?

SUTHERLAND: Oh sure! Yep! And snakes, they seem to my eye, at least, to be sort of episodic, in their behavior, and so if there is a day, kind of like today, when you have nice weather, it’s not too hot, not too cold, right about the temperature snakes like, then you might have a lot of one species out moving around at the same time. This time of year, it’s mating season for a lot of snakes and so, you are more likely to see more than one. There’s a viral image going around the internet the past week or so of a mating ball of northern water snakes that somebody found over, I think, on a green way in Raleigh. It was described as a massive hoard of snakes. I think it was one female–usually with water snakes it’s one female and three or four males but that can be impressive, and in the fall, tends to also be a time when snakes are out.

SUTHERLAND: Yeah, and know what to look for. Know what you’re looking at. There are some great resources out there. A good website for people to refer to is herpsofnc.org and it has pictures of all of our North Carolina snakes on there and if you find one, you can take a picture of it and go back and look it up and see what you found.

JOHNSON: Perfect, good advice! Anything as we close, Ron?

SUTHERLAND: Gardeners are some of the front-liners when it comes to understanding the ecology of the natural world and understanding relationships, between plants and their pollinators, and plants and other species. Snakes are an important part of the ecosystem, so I hope people will not see them as a dangerous pest, but rather as a hallmark. If you have snakes in your yard, then that means you are doing something right. You have a fairly intact ecosystem.

JOHNSON: All good advice. Thank you!

JOHNSON: You have been listing to Getting Dirty in Your Garden brought to you by NC State Extension Master Gardener Volunteers.  You may find this and future episodes on our website: gettingdirtyinyourgarden.org

Episodes of Getting Dirty In your Garden are available as a downloadable podcast and thanks to Georgiana Kiggins, an Extension Master Gardener Volunteer in Lee County, a transcript of each episode is also available on the website.

Until next time, why not go out and get dirty in your garden?